[We've answered the question! Scroll down for a major update!]

Unlike the purchase of the property where he now resides, the sale of 2008 Democratic Party vice-presidential nominee Senator Joseph Biden's previous home to an executive with credit card banking powerhouse MBNA, a major corporate benefactor for Biden's political campaigns, raises significant questions. The primary question: did Senator Biden disproportionately benefit from the sale of the property?

To find out, we'll use the same method we used to demonstrate that Senator Biden did not disproportionately benefit from the purchase of his current property. First though, let's consider the basic circumstances of that sale as reported by the Delaware News Journal's Cris Barrish:

In 1996, Biden sold a home in Greenville for the asking price of $1.2 million -- more than six times what he paid two decades earlier -- to John R. Cochran III, a top executive at the MBNA credit card bank that was a longtime political benefactor.

The article provides a basic description of the house, along with the price for which Biden purchased the property in 1975:

Biden sold his house in the North Star development near Hockessin in 1975, three years after his first wife died in a car crash. He subsequently bought a 10,000-square foot former DuPont Co. mansion.

The first-term senator paid $185,000 for the stately colonial near Hagley Museum that was owned by a now-defunct development partnership building upscale homes off Montchanin Road.

We now have our starting point. Senator Biden purchased his former 10,000 square foot mansion in 1975 for $185,000 and sold it in 1996 for $1.2 million. Since the OFHEO's data for the annualized rate of appreciation of Delaware real estate values only extends back to the first quarter of 1976, we'll begin at that point. We should note that using this starting point may actually overstate the value of the home, since 1975 was a period in which many home values across the U.S. were declining due to the poor economic conditions of the time - you can see this reflected in the very negative rate of appreciation recorded for the first quarter of 1976 in the chart below: 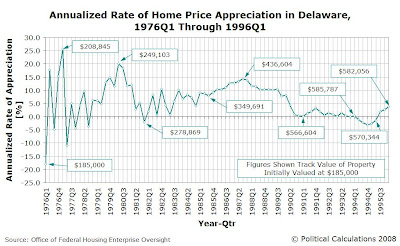 That very large difference raises a red flag. As it happens, Barrish's article provides a potential explanation for the difference we observe - the home that Senator Biden purchased was in a distressed condition:

An account of Biden's purchase of his home at 6 Montchan Drive was included in Richard Ben Cramer's 1988 book on presidential candidates, "What It Takes."

"It's the kind of place a thousand Italian guys died building -- hand-carved doorways, a curving hand-carved grand staircase that Clark Gable could have carried a girl down, a library fit for a Carnegie, or Bernard Baruch, someone like that," Cramer wrote. "Joe found it one night, a couple of years after he became a senator.

"He was driving around, like he did back then. He was snooping around Greenville, streets of his dreams, when he saw it, all overgrown, boarded up. Some developer was going to knock it down. ... He got in the developer's face and started talking -- fast," Cramer wrote.

Leaving aside the mental image of Senator Biden cruising through the ritziest parts of town to scope out the real estate scene while wearing a trenchcoat and dark glasses, we see that the property was a major fixer upper. But how much of a major fixer upper?

To find out using our method for estimating the value of real estate property in Delaware, we would need to know how the property would have been valued in 1975 if it had not been in such an apparently run-down condition. To do that, we built a tool to do that math. That tool is below, already set up with the value for which Biden sold the house in the first quarter of 1996, for which we assume that the house was no longer in a distressed state:

Using this tool, we find that the non-distressed value of Senator Biden's previous home in 1975 would have to have been $381,406 to support the 1996 non-negotiated purchase price of $1.2 million to the MBNA bank executive, given the average annualized rate of property value appreciation in Delaware for each quarter over that time interval.

If we assume that Senator Biden "marked up" the value of his home for sale by 10%, that would drop the equivalent 1975 valuation of the "non-distressed" property to $343,266, which would define the lower level for which the $1.2 million actual sale price might be considered reasonable.

Now, the question is: could that home have held that valuation in 1975? If it could, then the indication would be that Senator Biden did not disproportionately benefit from the sale of his previous home to the executive working for his corporate political benefactor. If the equivalent 1975 valuation of the house in a "non-distressed" state falls below that level, then that would clearly indicate that Senator Biden did in fact disproportionately benefit from the deal, with the difference between that lower valuation and the 1996 sale price of the property revealing how disproportionately.

But to answer that question, one would need the to have data that provides the value of comparable properties for that era, which we unfortunately do not have at this time.

Alternatively, one could use the tool to compare the price history of the sale of similar properties that sold over the interval from 1976 to 1996 to see how close they come to the level of Senator Biden's "undistressed" transaction. The tool is capable of handling transactions for each quarter from 1976 into the first quarter of 1996.

And that's where we'll leave off. Without that data, the answer to the primary question of whether Senator Biden disproportionately benefitted from the non-negotiated sale of his previous residence to a representative of a major political benefactor at a highly inflated valuation is: maybe.

If you've got the data, you're more than welcome to beat us to the answer! [Update 10 September 2008: We have a winner! Keep scrolling down....]

The question of whether Senator Biden disporportionately benefitted from the sale of his previous home has arisen largely as a result of Senator Biden's long and vigorous advocacy of policies that have favored MBNA, which have earned him the title of being the "Senator from MBNA" in some circles. A definitive answer to the property valuation questions that we've asked here would go a long way to either demonstrating or disproving the existence of a long-standing quid pro quo between MBNA and Senator Biden.

Update 10 September 2008: Via e-mail, and using a brilliant bit of deduction, Andrew Fish found a neat way to confirm whether Senator Biden disproportionately benefited from the 1996 sale of his home to an MBNA executive.

Andrew's idea is to project the value of the Senator's former home forward to today's values, rather than backward as we were. This way, if the forward projection of the home's value based upon its 1996 sale price turns out to be substantially above what homes comparable to Senator Biden's previous home have sold for recently, we would have a very clear indication that it was highly overpriced in 1996.

Likewise, if that projected value clocks in at or below the same valuation that comparable homes have sold for recently, then it was fairly priced in 1996 and we can demonstrate that Senator Biden did not disproportionately benefit from the sale of his former home to the executive with his corporate benefactor.

With Andrew's permission, here's what he found when he took this step:

After reading Part 2 of Biden's house problem, I worked the sale numbers in reverse from what you did.

Of course, we need to know if that's a reasonable current value. For this I turned to zillow: http://www.zillow.com/homedetails/72995985_zpid

So, I guess my point is, if the house is a fair value at a current price of 2.56MM, then the 1.2MM sale price wasn't highly inflated.

We've largely confirmed Andrew's figures, although we came up with a valuation of $2,620,875 when we revamped our tool above to project forward into the second quarter of 2008. That's just a little over 2% different from what Andrew found using the OFHEO's housing value calculator, which puts it right in the same ballpark.

With that being the case, we can conclude that Senator Biden did not disproportionately benefit from the sale of his home in 1996.

Our tongue-in-cheek look into the negotiations and transactions surrounding Senator Obama's purchase of his current home - kind of a fun introduction to the relative valuations involved, all in the context of a trip to McDonald's!