Yesterday's news that the stock market was in a free-fall, thanks to the bankruptcy of Lehman Brothers, the acquisition of Merrill Lynch by Bank of America and the potentially pending failure of AIG brought absolute terror into the hearts of the traders and titans of Wall Street.

But then, pretty much anything does. They're a bunch of pansies. Try this experiment sometime: Go to the archives of any newspaper to find an article about the stock market after it has has closed lower than it opened. Somewhere in the article, you'll find some variation of the following sentence:

Lately, the first blank has been filled in by "higher oil prices" and the second option has been "the economy." Our favorite formulation, which we've never seen, involves "little Susie's chicken pox" and "the timely delivery of Girl Scout cookies."

Now, let's take a moment to look at things a bit more seriously. The chart below shows the relationship between stock prices (as represented by the average monthly value of the S&P 500's daily closing values) and the S&P's underlying trailing year dividends per share: 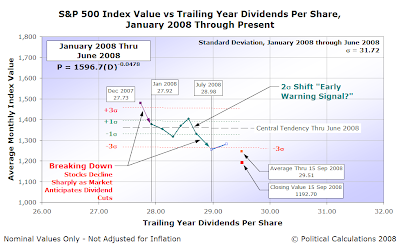 We've marked where the stock market closed on 15 September 2008 on the chart for the purpose of illustration. At first glance, things seem pretty bad - the level of the stock market's close yesterday is well below it's average for the month of August.

The key to whether or not that's a significant thing is if it continues to stay down at that level. The reason we use the average monthly value of the S&P 500 index is to help minimize the noise from the stock market's day-to-day volatility so that we can better see the overall actual movement.

Doing that, we find that stock market through this point in September 2008 isn't as bad off as it might appear from the single data point. And the truth is a large portion of what investors collectively expected to happen is now happening. Stocks moved substantially lower by large margins in both June 2008 and July 2008 in anticipation that there would be several significant failures in the distressed financial sector of the stock market.

Counting today, we have eleven more trading days to go in September. That's a lot of time in which a lot of questions related to which distressed financial institutions will survive and which will not, as well as to gauge their full impact.

For the public, it's simply way too soon to bother panicking over Wall Street's woes. For now, that's the job of those pansies on Wall Street whose livelihoods are far more affected by the state of the financial giants who employ them. They reaped the greatest rewards by taking on more and more risk during the boom years, and now that it's been discovered that they took on way more risk than they ought to have, it's time for them to pay the price.

Let's call it Moral Hazard 101. If they're going to take on the risks for the sake of gaining the rewards that come from doing so, they also need to bear their full weight.

P.S. We've also updated our signature tool, The S&P 500 at Your Fingertips, with all the data available through the end of August 2008! Sure, we could have done it sooner, but we have to wait for the government to publish its Consumer Price Index data so we can calculate real rates of return!