Now that GDP data has been finalized for the second quarter of 2008, we can now confirm that First Trust's Brian Wesbury and Bob Stein did an outstanding job in anticipating by several months where economic growth for the quarter would be.

In the change from the preliminary revision to the final revision for 2008Q2's inflation-adjusted GDP growth rate they narrowed the gap between their predicted value and the final figure to overshoot it by just 0.2%, having predicted 3.0% compared to the 2.8% finally recorded in the quarter. By contrast, at the time Wesbury and Stein made their prediction, the consensus among economists was for a growth rate of 2.2%.

And you can count us among those who were way off target from their forecast! Using our preferred forecasting techniques, we way overshot the final figure using the Climbing Limo approach and undershot by a wide but lesser margin using the Modified Limo approach. As a consolation prize however, our modified limo method was more successful, anticipating a Real GDP figure of 11,656.2 billion (in Year 2000 "chained" US dollars), $72.1 billion below the final Real GDP level of $11,727.4 billion recorded for the quarter.

But in these days of $700 billion banking bailout discussions, we suppose that we could call that miss chump change. We just wish we were the chumps with that kind of change! But does that miss mean that our forecasting techniques are toast?

Not necessarily! One of the neat characteristics of the GDP forecasting techniques that we use is that they're self-correcting. Even when they're off by a wide margin, they ultimately get pointed in the right direction and much more often than not, get pretty close to the target - particularly the Modified Limo method which only looks ahead to the next quarter once the data for the previous quarter is finalized. The Climbing Limo approach shows a lot more volatility, which is to be expected from a method that looks three quarters ahead in time.

The chart below tracks where Real GDP has been recorded with respect to where either the Climbing Limo or Modified Limo methods anticipated. We've also projected both forecasts ahead using the most recent finalized GDP quarterly data: 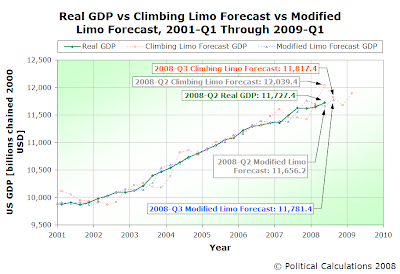 Given the current economic climate, we would anticipate that Real GDP will be finalized for 2008Q3 at or a bit below the Modified Limo forecast value of $11,781.4 billion.

No one said fortune telling was an easy business! But it sure is nice for the pundit industry that no one ever seems to remember the huge misses. Former chief economist for the National Association of Realtors David Lereah certainly hopes so!