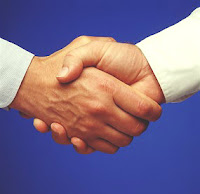 When we look at the current crisis affecting the world's financial markets, we see opportunity. We see opportunity, because we see a straightforward way that may be able to achieve many of the objectives needed to resolve many aspects of the crisis with a new innovation: the creation of a new kind of information market.

Let's look at those objectives. Barry Ritholtz features a ten item list of things he believes are necessary to resolve the current crisis. Below, we've excerpted the ones that we believe our proposal for a new kind of market would immediately address:

1. Recapitalize Banks: We've discussed this previously; Its the root of the credit freeze. We should follow a Swedish/Buffett/British type preferred purchase plan. Match private equity investments, allowing the private sector with their own capital at risk to select the banks to be saved and the terms of the investments.

5. Guarantee all interbank lending: If you want to see banks begin lending again, have the Fed -- the lender of last resort -- guarantee the transactions.

6. Kill the Bad Banks: Aggressively seek and destroy those banks that won't make it. Put down the bad banks so those that can be saved can be rescued.

10. Lead: The absence of strong leadership allowed a bad situation to become much much worse. We need forward looking thinkers in positions of authority. Let's hope the next administration -- Obama or McCain -- is smarter then a the gang that couldn't shoot straight who is presently mismanaging things.

There's one aspect to the current crisis that Barry doesn't address in his list of proposals that forms the principal reason why the world's financial markets are verging on freezing up: financial institutions are not willing to freely trade with one another because they do not trust the information they have on the assets they would be trading. While many of Barry's suggestions are directed toward re-establishing confidence that regular consumers might have in these financial institutions, they do not go far enough in addressing the knowledge problem creating the distress in the world's markets.

To get to the root of that knowledge problem, let's look at why so many subprime assets were securitized. Arnold Kling describes the incentives that drove the formation of the information problem financial institutions have today:

An FDIC document on the risk weights of different bank assets. The higher the weight, the more capital the bank has to hold against that asset. As I read table 1 and table 3, if you originate a loan with a down payment of 20 to 40 percent, the risk weight is 35. But if you buy a AA-rated security, the risk weight is only 20. So if a junk mortgage originator can pool loans with down payments of less than 5 percent, carve them into tranches, and get a rating agency to rate some of the tranches as AA or higher, it can make those more attractive to a bank than originating a relatively safe loan. If you want to know why securitization dominated the mortgage market, this explains it. Regulatory arbitrage, pure and simple.

Because of this incentive, very large quantities of these subprime assets were securitized by blending them with prime assets into larger pools of combined assets, which were then subdivided into slices (or "tranches"), and perhaps later subdivided further or recombined into other compositions of prime and subprime assets. Consequently, financial institutions today have little idea how good any of the assets represented by these financial instruments, called Collateralized Debt Obligations, are really worth. Because they have no idea of what they're trading is really worth, no one is willing to trade. They might know about the worth of their own assets, but they don't trust the information about the value of the assets held by the counterparties with whom they would be trading in these kinds of transactions.

To borrow John Boehner's insightful metaphor from recent political discussion, no one wants to end up with a "crap sandwich."

So how can you fix a trust problem? How can you address the underlying reasons why no one is willing to trade these financial instruments? How can you also deal with the other problems that have arisen in response to these problems, such as the erosion of capital in the financial sector of the global economy?

Here's how. The way to fix a trust problem is with transparency. The way to establish transparency in this situation is to make all information about all these assets available to all potential parties to transactions involving these assets. By doing so, you would eliminate the fear of those participating in the market of being unknowingly stuck with the proverbial "crap sandwich." And that's where a new kind of information market might make sense.

Here, financial institutions would be able to buy and sell all the information they have related to the assets they hold. The participants in this kind of market would gain in that they would have much better knowledge of what they're trading, making it possible to establish confidence in subsequent trades of real assets. Re-establishing confidence in these transactions will go much further toward rebuilding the health of the affected global markets than simply guaranteeing all interbank lending for a short period of time ever could.

We should also note that this step is essential to effectively jump-starting the world's stalled markets and re-establishing the velocity of the money associated with the transactions of the assets traded upon them. One way or another, this information discovery process is going to play out - the mechanism provided by our proposed information market would get it there much sooner.

Here, instead of having governments put taxpayer money at risk by taking direct ownership stakes in these institutions, which would still have the same information problems inhibiting their ability to trade, taxpayers would be better served by acquiring the rights to the information they have about the assets they hold.

The government could then recoup money spent to recapitalize these firms by selling the information they acquire about the assets they hold to information market participants.

This brings us to the next argument favoring the creation of an information market to deal with the problems of today's financial crises. Without such a visible market, the much needed process of financial institutions sharing information with one another would constititute potential collusion and price-fixing among the institutions, which would have negative economic consequences. The information market would provide the needed structure and mechanisms by which such information sharing would be allowed to occur visibly, avoiding the almost invariably negative outcomes that come from hidden backroom deals.

So there you have it. The new kind of information market we propose offers a solution that unlocks a new source of capital for financial institutions, creates a firm foundation for establishing confidence in the value of assets being traded that today is lacking and provides a means of identifying and accelerating the absorption of failed firms in the world's markets.

The bottom line is that it would create new opportunities. That's what's needed for positive leadership far more than anything else today.