From time to time, we get some pretty high quality e-mail. In response to our post in which we presented a chart mapping the major phases of the Great Depression using stock market dividend data, one of our readers emphasized the role of the Smoot-Hawley tariff in exacerbating the economic conditions that ultimately produced the Great Depression.

The tariff was designed to increase the cost of imported goods to the U.S., imposing duties of more than 60% of the value of these goods, for the purpose of pushing their prices up to "protect" U.S. producers. In the words of the WTO's Pascal Lamy, it was a fantastic success (HT: Carter Wood):

If the idea was to curb imports, Smoot-Hawley was a fantastic success - by 1933 imports had fallen from $4.4 billion to $1.3 billion while exports fell 69% over that same period to $1.6 billion. But there was an unintended consequence to Smoot-Hawley - its contribution to an economic depression. Smoot-Hawley touched off a domino effect of retaliation and counter-retaliation among trading partners which provoked a severe contraction of international trade, depressed growth and rising unemployment around the industrial world. From 1930 to 1932 the unemployment rate soared from 8.7% to 23.6% and remained at more than 14% for the remainder of the decade.

One of the consequences of the prices of all these goods being pushed up is that the prices that U.S. producers charged for their goods also went up substantially. And as most economists know, when the price of something goes up, the quantity demanded goes down - the higher prices they could and were charging for their goods ultimately hurt U.S. producers as consumers demanded less of their products. That loss of demand led to cutbacks in production, which led to greater unemployment, which further reduced the ability of people to buy the products at the higher prices.

Believe it or not, the effect of the Smoot-Hawley tariff was shown on our chart: 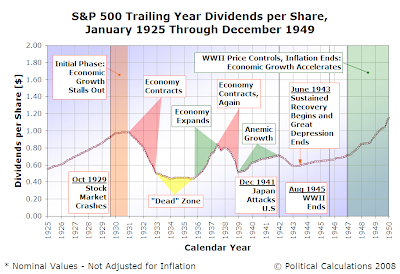 Do you see it? It's right there in the bottom left-hand corner, identified as "Oct 1929 Stock Market Crashes"! Thanks to Jude Wanniski's research, the event that immediately precipitated the Great Stock Market Crash of 1929 was traced to the collapse of the coalition opposing the tariff in the U.S. Senate the day beforehand, which would ensure that the tariff would indeed become law (it finally did in June 1930). Investors in the stock market, recognizing the negative impact of the tariff, reacted immediately, sending stocks plunging on what became known as Black Thursday.

But the passage of the Smoot-Hawley Tariff doesn't fully account for all that happened. Another e-mailer asked about the role of inflation and deflation. The Great Depression is, in its essence, a long running deflationary event. To show that, we revisited our chart and plotted the inflation-adjusted values of the S&P 500's dividends per share from January 1925 through December 1949, using the Consumer Price Index of October 1929 as our base for finding the dividends in constant dollars: 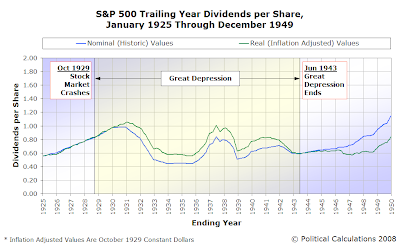 The beginning and end of the Great Depression can be identified as the period from October 1929 through June 1943 as the period in which the real (inflation-adjusted) values of the S&P 500's dividends per share consistently exceeded their nominal (historic) values.

Finally, we received another e-mail from a musician, seeking to promote their work - we'll leave you with their music video featuring images from the Great Depression: