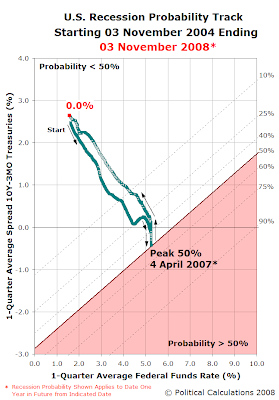 We haven't been updating our recession probability track very often, as the probability it foretells of recession one year into the future hasn't been changing very much. Right now, it tells us that the probability of a recession beginning on the 3rd of November in 2009 is 0.0%.

What's more, right now, it would appear that the probability of a recession forecast for a year from now is almost exactly where it was four years ago, with a similar Federal Funds Rate and a similar spread between the 10-Year and 3-Month Constant Maturity U.S. Treasuries:

That's the kind of figure that we like to see, but unfortunately, that kind of figure isn't going to scare anybody, which means that we're not going to crank up our readership numbers unless we can find some other way to rattle people's cages.

So, let's try this instead! We noticed that when we plot our forecast recession probability against time (our chart is presented later in this post), shifting the probabilities to coincide with the dates to which they apply, that an amazing coincidence was revealed. While the forecast probability of a recession had been declining steadily since peaking in April 2008, the most likely time that the NBER would declare a U.S. recession had begun, in the week of September 15-19, it briefly reversed upward.

That uptick just happened to coincide with the beginning of a 400 point crash in the stock market: 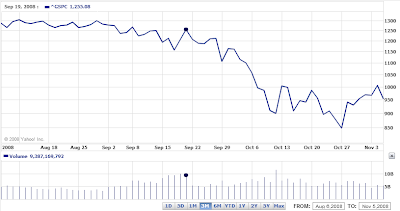 Coincidence? Well, duh, yes! But if you're looking for something to get worked up about regarding the health of either the economy or the stock market, that uptick of doom could be your ticket to nervous nirvana!

Better yet, there's another, slightly smaller uptick scheduled to happen this month, in or around 20 November 2008: 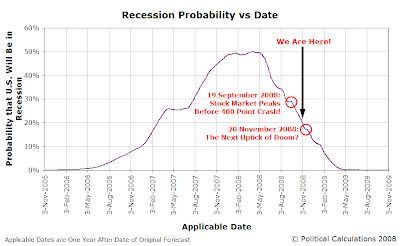 All we'll say is that you've now been warned! Beware the recession probability uptick of doom!