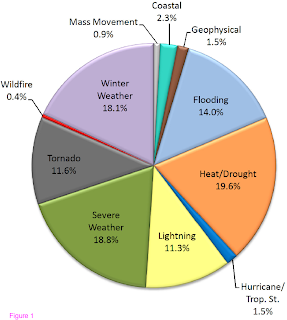 Winter weather. Heat waves. Drought. Lightning. Earthquakes. Hurricanes. Wildfires. All the forces of nature that can unexpectedly lead to a premature end. Now, thanks to the work of Kevin Borden and Susan Cutter (HT: Physorg), we have a really cool map that identifies the regions of the U.S. for which people are most prone to becoming a mortality statistic as a result of these kinds of natural hazards.

The two scientists took data from the Spatial Hazard Event and Loss Database for the United States (SHELDUS), and refined it to improve its accuracy in identifying deaths resulting from a modern categorization of natural hazards by geographic location. From there, Borden and Cutter analyzed the spatial distribution of mortality resulting from each type of natural hazard in the U.S. (excepting Alaska and Hawaii) for the years from 1970 through 2004.

In all, they identified some 19,958 deaths resulting from natural hazards. The chart in the upper right corner of this post, taken from their paper, illustrates the percentage breakdown of mortality resulting from each type.

The results from their spatial analysis is especially interesting. The map below illustrates the mortality data down by Federal Emergency Management Area (FEMA) region for the years from 1970 through 2004: 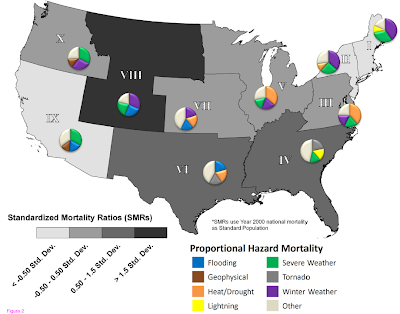 Instead, we see that heat and drought conditions are more likely to have caused an unexpectedly high proportion of deaths due to natural hazard in the midwest and in the mid-Atlantic states. What that suggests to us is that the infrastructure in these parts of the country is much less capable of handling high heat situations than those parts of the U.S. that routinely experience high heat and drought conditions.

Another remarkable observation is how much severe weather, tornados and lightning would appear to have contributed to deaths caused by natural hazards, especially in the southeast part of the U.S.

Borden and Cutter describe their results:

Chronic everyday hazards such as severe weather (summer and winter) and heat account for the majority of natural hazard fatalities. The regions most prone to deaths from natural hazards are the South and intermountain west, but sub-regional county-level mortality patterns show more variability. There is a distinct urban/rural component to the county patters as well as a coastal trend.

The intermountain west has the highest standardized mortality ratio in the U.S. for natural hazards, with winter weather, flooding and severe weather accounting for over three quarters of deaths caused by natural hazards.