Since we routinely monitor the growth rates of U.S.-China international trade, we were among the very first to see China's economy begin decelerating. We've charted it, and we've observed China's heavily trade-dependent economy's accelerating decline over the last two years. 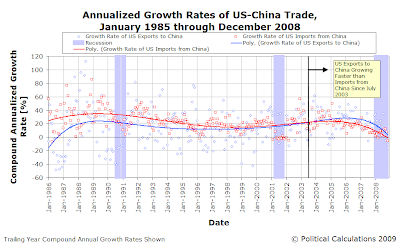 Here, the key evidence is the growth rate of U.S. exports to China, represented by the blue curve in the chart above. Given the steep rate of descent evident in the chart, we would project that the volume of goods China imports from the U.S. will have moved into negative territory sometime either in either December 2008 or January 2009.

Since China's demand for U.S. goods was largely driven by its surging economy of recent years, the accelerating decline of the growth rate for this trade is direct evidence that China's economy is not just perking along at single-digit growth rates as its official statistics might indicate, but rather is now fully in a phase of contraction.

Edward Hugh has quite a bit more, plus lots of other trend charts and commentary, at A Fistful of Euros!