Doug Short has a great chart comparing four big bear markets for stocks as a percentage change of their peak value before finally hitting bottom:

We thought it might be fun to turn that chart on it's head and look at how stock prices changed in the ten years following their hitting bottom, as a percentage of their lowest average monthly value during their crashes. To do that, we turned to our historic data for the S&P 500, found the five worst percentage declines from peak to trough, then created the following graph to show the post-crash aftermath: 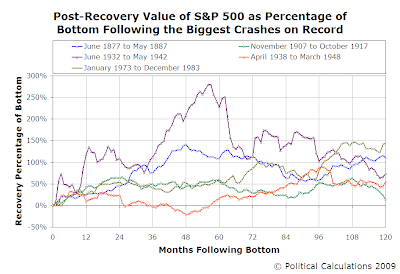