Political Calculations
Unexpectedly Intriguing!
February 3, 2009
Does It Pay to Buy vs Rent? 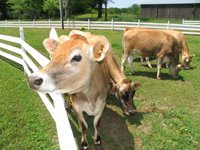 Economics, when you get right down to it, and whether economists like to admit it or not, revolves almost entirely around cows.

Needless to say, we hope that explains why we were reading Bruce Jones' article on the topic of whether or not it makes more sense to buy as opposed to rent in the January 2009 edition of Dairy Herd Management. In the article, Bruce describes a situation faced by his brother-in-law, a farmer who feared he was being shaken down by his landlord, the University of Illinois:

About a year ago, I got a call from my brother-in-law. He had learned that his landlord, the University of Illinois, had received a cash-rent bid of $360 per acre on the 700-plus acres he had rented the previous year. This was an increase of about $160 per acre. The question was whether he should match the $360 bid and keep the 700 acres that had also been farmed by his father and grandfather for more than 50 years. After some discussion, my brother-in-law said he was uncomfortable paying such a high rent. He let what had been his family’s “home farm” go, so that Illinois’ land grant university could earn the highest possible return on land it had received as a gift several years before.

The question that Bruce's brother-in-law raised was whether he should consider buying the land instead of paying the 80% higher rent payment over the $200 per acre he had paid to rent the same land in the previous year. Bruce provides the relevant numbers (we'll emphasize key figures in boldface type): 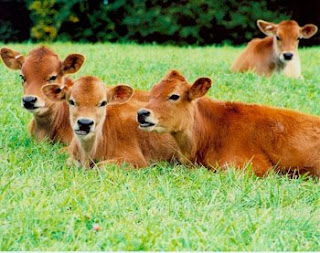 For that, we need an expert on the cow business, and who better to turn to than GMU economist Arnold Kling?

As it happens, we have no idea if Arnold is or isn't an expert on any aspect of the cow business, but he does have a trick up his sleeve for working out whether it would be more profitable to buy or to rent, which he imaginatively calls the profitability formula.

We've created a tool to run Bruce's brother-in-law's numbers to see where it might make sense for his to buy the land as opposed to continuing to rent it, even at the higher rent being sought by the University of Illinois. We're figuring that land in the part of Illinois where the farmland in question is located is growing in value at roughly 2.0% per year. Of course, you could substitute your numbers or assumptions for these to look at any similar kind of choice that you might be considering:

Using the default numbers in the tool above, we find what Bruce did when he turned to a table showing the net cost of owning land for various rates of appreciation in its value:

The rent-equivalent values in the table show that when land values are increasing at an annual rate of 2 percent or more, it is less costly to purchase the land for $6,000 rather than pay a rent of $360 per acre.

We see that in the tool above, which confirms that a 2.0% net rate of appreciation represents the break-even point for whether buying is better than renting.

The math behind this tool works for just about any situation in which you might consider buying vs renting, whether it be cars, vacation time shares or houses, etc. In fact, we'll be using the math from this tool to consider some other interesting questions in the weeks ahead!...