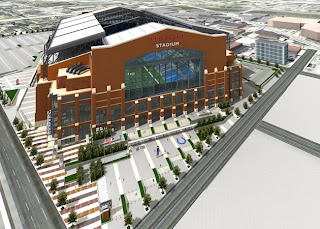 All over the world, millions of people attend professional sporting events each year. If you factor in media coverage of sports, that number climbs into the billions. And as you can imagine, sports are a big business, generating billions in revenue each year, which means that there are a lot of people who want in on that kind of action!

The state and local governments where top teams are based are no different. Politicians are quick to offer taxpayer dollars to subsidize new stadium construction projects for the top tier professional sports teams within their jurisdictions, arguing that doing so will boost the local economy. Dennis Coates considers the basic question inherent in that argument (HT: J.C. Bradbury):

The most basic question about stadiums, arenas, and sports franchises is the extent to which they contribute to the vitality of the local economy. Supporters of publicly financed stadiums argue that the benefits are substantial, while opponents say they are small and highly concentrated among the wealthiest citizens.

Coates describes the challenges of answering to what extent professional sporting events contribute to a local economy for both those supporting the public subsidies and those opposed to them:

To buttress their case, supporters mostly use economic impact studies that predict how the local economy will be affected by the stadium, while opponents compare the economy before and after the facility is constructed. Supporters tend to imply that redistribution of economic activity from the suburbs or outlying areas of a city to the downtown is desirable, while opponents generally oppose this sort of redistribution and focus instead on job and income creation.

The typical economic impact study gathers data on all aspects of spending related to a stadium, including the money spent to build it and the money spent by fans in connection with the stadium (including on tickets, at restaurants, and at hotels). The impact of this spending ripples outward into other areas of the economy through a multiplier. By linking spending to employment, the study then calculates how many jobs a stadium has created. It does not perform a cost-benefit analysis, which would address the opportunity costs of raising taxes to pay for a stadium and consider alternative uses of those funds.

Academic researchers have examined the prospective economic impact studies and found a variety of methodological errors in them, all of which raise doubts about the magnitude of the predicted spending and job increases. Other scholars use data from multiple years before and after stadium construction to measure the impact of the stadium. These ex post studies reject stadium subsidies as an effective tool for generating local economic development.

For our part, we thought it might be interesting to consider the number of jobs directly tied to professional sports within a community. Here, we chose the city of Indianapolis, which recently completed a publicly subsidized stadium construction project for the Indianapolis Colts, the city's National Football League (NFL) franchise. Wikipedia describes how the stadium was funded:

Groundbreaking for the stadium took place on September 20, 2005. The total cost of Lucas Oil Stadium was $720 million. The stadium is being financed with funds raised by the State of Indiana and the City of Indianapolis, with the Indianapolis Colts providing $100 million. Marion County has raised taxes for food and beverage sales, auto excise taxes, innkeeper's taxes and admission taxes for its share of the costs. Meanwhile, an increase in food and beverage taxes in the eight surrounding doughnut counties (with the exception of Morgan County) and the sale of Colts license plates.

That's a lot of taxes to support a facility that will only be used for its designed purpose on just eight days a year, assuming no post-season play. With a team good enough to win its division and home-field advantage throughout post-season play, and the good fortune to do so in a year in which the city might host the Super Bowl, that number might rise to eleven days in a year.

So how many jobs are directly supported by that $720 million investment?

Being extremely generous, we'll assume that one-fourth of this number, or 900 individuals, are employed as athletes, coaches, referees, food preparers, stadium vendors, cashiers, and other jobs supporting the operation of Indianapolis' professional football franchise. We suspect the actual number would be closer to half that value.

The data jocks at the BLS add their two cents on the amount of jobs directly provided by the spectator sports industry:

Dennis Coates describes the economic impact of taxpayer-funded stadiums for income and employment:

My own research, conducted with economist Brad Humphreys (who is now at the University of Alberta), has used perhaps the most extensive data, incorporating yearly observations on per capita personal income, employment, and wages in each of the metropolitan areas that was home to a professional football, basketball, or baseball team between 1969 and the late 1990s. Our analysis tried to determine the consequences of stadium construction and franchise relocations while controlling for other circumstances in the local economy. Scholars Robert Baade, Allen Sanderson, Victor Matheson, and others have taken slightly different approaches, but the results are fairly constant from one analysis to another. There is little evidence of large increases in income or employment associated with the introduction of professional sports or the construction of new stadiums.

Correct us if we're wrong, but don't the economic stimulus arguments made in favor of massive sports stadium construction projects sound all too much like those made in favor of Barack Obama's recently passed stimulus package? And given the documented outcome of the non-effectiveness of taxpayer-funded sports stadiums in generating significant numbers of jobs or higher incomes, shouldn't we expect the same from the President's stimuli proposals?