Part of what makes the stock market chaotic, or rather, complex, is that new information that publicly-traded companies release can apply to different points in the future. With dividends typically paid on a quarterly basis, information affecting dividends in each individual quarter looking forward can affect stock prices today, as investors react to information related to future dividend payments expected to be paid out in the current quarter, the next quarter, two and three quarters from now, and even a year or more ahead in time.

The bottom line in all this is that if we know the current value of stock prices, which establishes a base from which we can project future changes, and if we know the time-shifted expected rate of change of dividends per share at some point in the future and the approximate value by the amplification factor will modify that signal, we can work out where stock prices will go. 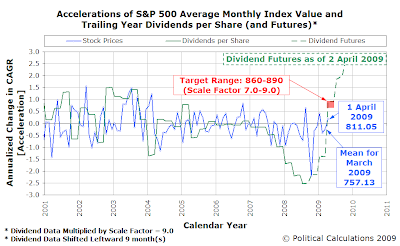 We did that this morning using the level of stock prices as established in the month of March 2009 and using the very latest we know of the time-shifted future expected growth rate of dividends per share as of the morning of 2 April 2009.

We should note that this anticipated change in stock prices is not driven by a rapidly improving business situation for the companies of the S&P 500, but rather, the expectation that the current situation will not further worsen.

We do have a tool in the works that will allow you to run our numbers or test drive your own scenarios, but we're still early in the development phase. We'll keep you posted!

For more background information about our analytical methods, please click the tags at the bottom of this post (the "chaos" one is probably the most relevant!)