Last year, we made a bold prediction: 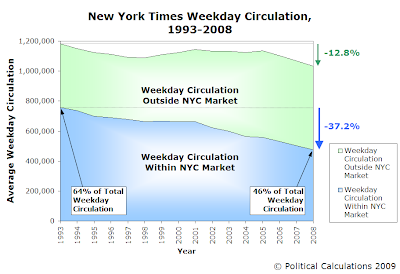 We can now confirm that this prediction appears to be very nearly on target, which we'll demonstrate later in this post. First though, let's confirm that 2008 wasn't kind to the New York Times, as its latest annual report indicates. The New York Times 10-K SEC filing reveals that the various strategies mounted by the newspaper's management to forestall the loss of circulation in its home market and nationally has, at best, only stabilized the rate of descent of the newspaper's print circulation. Our first chart (right) illustrates the continuing loss of readers both nationally and especially in the newspaper's 31-county home market in New York.

We confirm that since peaking in 1993, the New York Times has lost some 12.8% of its total circulation. More remarkably, the newspaper has lost 37.2% of its circulation within its home market. This result is partly by design, as the newspaper's management has pursued a national marketing strategy at the expense of its local market, as evidenced by the smaller declines for other newspapers within the New York market. Those smaller declines translate into increased market share for the other newspapers.

Our updated table below provides the circulation numbers that we used to create the chart above. Clicking the "Year" links provides the relevant NYT's SEC filing for the indicated year, from which we obtained the newspaper's circulation data, which is reported in the section of the annual report in which the company's management discusses its business: 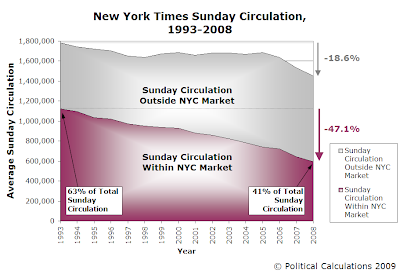 As of 2008, we confirm that the New York Times has lost nearly half of its circulation in its home 31-county market in New York, falling some 47.1% from its peak value recorded in 1993. We also confirm that nationally, the print circulation of the Sunday edition of the New York Times has fallen 18.6% since its peak value of nearly 1.8 million in 1993.

We've summarized all the annual data for the New York Times' Sunday edition circulation in the table below. Clicking the "Year" links provides the relevant NYT's SEC filing for the indicated year, from which we obtained the newspaper's circulation data, which is reported in the section of the annual report in which the company's management discusses its business:

We believe that the New York Times' print circulation for its weekday editions is now beginning to fall below the one-million mark. We base this belief upon the steady decline we observe in the newspaper's reported average weekday circulation. Here, if take the average rate of decline recorded in the past three years of 2.9% for its total circulation, we would project that the circulation level that the New York Times will report in its next SEC 10-K filing will be roughly 1,000,000. Given the typical variation we might expect to see on a week-to-week basis, that figure will confirm that the newspaper's circulation is indeed falling below one million on an increasingly frequent basis.

The declines in print circulation that we've documented above reflect the continuation of a deteriorating business situation for the New York Times, as lower print circulation figures point to lower revenues realized through advertising and subscriptions. While the New York Times is continuing to grow its online presence and corresponding advertising revenues, online ads generate far less revenue than do traditional advertisements, which strains the company's financial performance.

Most telling, the editor of the New York Times' has publicly likened the newspaper's plight to genocide in the Darfur region of Sudan, suggesting a profound level of moral confusion on the part of the newspaper's management. That the editor later sought to minimize the impact of his statement by professing surprise that people might take his words at face value suggests a lack of seriousness and commitment to pursuing any sort of journalistic mission. That the editor wasn't disciplined indicates that lack of seriousness and commitment is shared by the New York Times' management and owners.

All of which begs the question: just what does the New York Times' management think they're in the business of doing anyway?