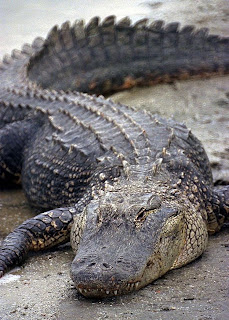 We weren't going to do this again. We really weren't. But then we found the statistics that tell how likely it is that an individual will die of an alligator attack in the United States, and that was all she wrote!

All the data in the table below is courtesy of the Florida Museum of Natural History, who was mostly concerned about people's perceptions of the frequency of shark attacks. Being so concerned, the minds at the museum calculated the relative risk of dying as the result of shark attack with respect to other causes of death in the United States.

We've presented their findings in the table below and, where we could, we extended their calculations to find the probability of other causes of death for which they only provided the raw numbers of deaths over a given period of time. Like death by mountain lion. Or death by collapsing sand hole, which not being Floridians, is a cause of death that we had never previously considered.

Clearly, the lesson from these footnotes is to stay away from bicycles in Florida, as they represent over 1 out of every 7 bicycle related deaths in the United States....

We've covered this territory before, as our previous posts on the topic reveal: