Political Calculations
Unexpectedly Intriguing!
May 26, 2009
The Dying Gasps of the Recession 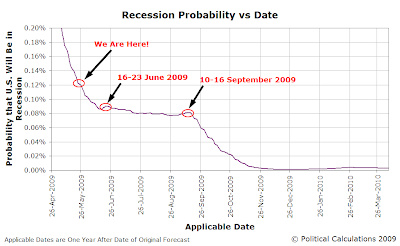 Previously, we noted a correlation between upticks in the probability of recession and negative events in the U.S. stock market, which would appear to follow in the aftermath of the probability of recession having peaked. We've speculated that these events have been triggered by the unwinding of the actions of bond and hedge fund traders of a year ago, who might have used options contracts as a way of protecting their investments at the time.

Their actions would appear to be a reaction to the narrowing or inversion of the U.S. treasury yield curve, coming as a slowing or reversing of an otherwise widening trend. Our speculation is that the expirations of the year-long options contracts they might have used could be behind some of the large, sudden sell-offs in the stock market that we've seen, which appear to be well-timed with the events of a year earlier.

We suggested that our next step would be to go into the past to see if we could correlate the changes we observe in our calculated recession probability based on the average level of Federal Funds Rate and the average spread between the 10-Year and 3-Month U.S. Treasuries over rolling one-quarter periods of time, but first, we thought we'd look forward to see what might be coming our way. The chart above shows what we found.

We'll see if the dying gasps of the current recession shake the stock market, possibly in as little as less than a month's time from today.