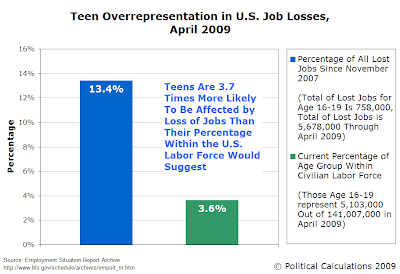 That indicates that through April 2009, teens are 3.7 more likely than their representation within the total civilian labor force would otherwise suggest to have been affected by the loss of jobs for those within their age group.

But, unlike every other age group in the U.S., the number of teen jobs has been progressively falling since peaking in 2006. The chart below shows how the average number of jobs held by teens has changed each year since January 2006 (the average shown for 2009 is through April 2009):

Looking at the average number of jobs held by individuals Age 16-19 between the year of 2006 and the first four months of 2009, we see that over one million jobs for teenagers have disappeared from the U.S. economy.

The chart above also confirms that June 2006 marked the peak of teen employment, with some 6,244,000 individuals Age 16-19 recorded as having jobs in that month. Our next chart presents how the number of teens with jobs has changed since then, as a percentage of their June 2006 figure: 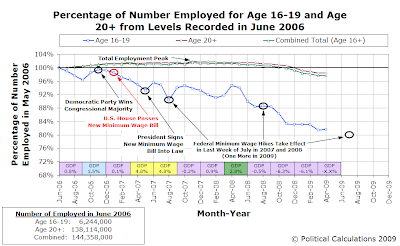