Political Calculations
Unexpectedly Intriguing!
07 May 2009
Should You Buy a Kindle? 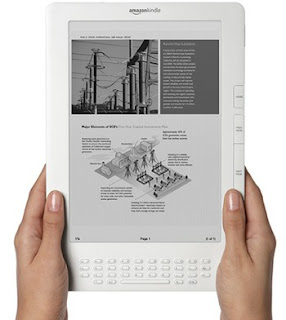 Amazon announced yesterday that the Kindle DX, a new, much larger version of its successful Kindle e-book reader, is now available for pre-order. The Kindle DX, which is roughly two and a half times larger than the previous edition, is in part being aimed at the college textbook market.

Our question today: Should you buy the new Kindle?

To answer that question, we've gone out and converted an Excel spreadsheet created by David Tufte to answer the same question for the existing version of the Kindle, which considers things like how much traditional books cost compared to their Kindle counterparts, how long you might use it, how much of a "warm fuzzy" you might get from being the proud owner of the gadget, and of course, since he's an economist, the opportunity costs of what you could otherwise have done with the money if you hadn't bought yourself a new Kindle! He does all this by calculating the cumulative net present value for the Kindle, adjusting it to account for the potential early salvage of the device, should the owner either sell it or stop using it after a given period of time.

Update 8 May 2009: David Tufte has updated his spreadsheet to incorporate the pricing for the Kindle DX. If you want the ability to do a much more detailed analysis of whether the new Kindle makes sense for you, we recommend it!

And because Amazon is aiming at the college student in its marketing efforts, we've entered default values appropriate to the college textbook buyer. Here, we assume that textbooks for our hypothetical university student will run at an average of $600 per year (or $50 per month), have an average salvage value of $20, while the Kindle versions of the same textbooks are a bargain at an average of $33.00 each! Because we assume a monthly average, we also set the number of purchases per month to be equal to one.

Our final assumption is that our college student will endure for four whole years, or 48 months. Will a Kindle be worth it to them? Let's find out....

Going with our hypothetical example, it very much pays for our college student to buy the Kindle DX, assuming that they're able to also get the textbooks they will need for their classes in the Kindle format, since we obtain a positive value for the Cumulative Net Present Value Adjusted for Early Salvage. If that value had come out to be negative, then either our college student would need to really crank up their reading of non-textbooks while in school or would really have to place a much higher "warm fuzzy" on owning their own Kindle DX.