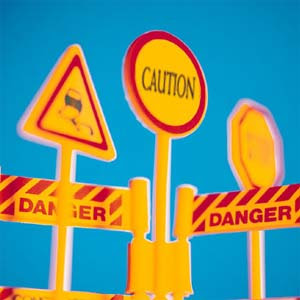 Welcome to the August 26, 2009 edition of the Cavalcade of Risk! For those of you joining us for the first time, we here at Political Calculations are mostly known in the blog carnival world as the home of On the Moneyed Midways, an "über-carnival" where each week, we present the best posts we found in our review of the week's business and somehow-money-related blog carnivals.

In our last edition of OMM, we featured excerpts from another blog carnival host's rant about off-topic contributions to blog carnivals, which appears to have really hit home with this week's contributors. The last time we hosted the Cavalcade of Risk, we had 48 contributors. This time, 30. And that's counting the clueless goons who apparently didn't get the memo....

You see, we believe that one of the best ways to discourage people from making bad decisions is to make them feel the pain from making a bad decision. If, for example, you've contributed an off-topic post to this edition of the Carnival of Risk, or just a really badly written one, we're going to make it hurt. How? Well, let's let the Cavalcade of Risk Blog Post Rating System do the talking for us. Here's how to interpret the ratings:

So, in using this system, a post with the ranking Aa1 is one that is fully on topic, will make you smarter and is highly readable. By contrast, reading a post with the ranking Dc3 would be like jabbing bamboo splints under your fingernails and then using them to hammer railroad spikes, but less pleasant. And before you say anything, we do know that "c" should say "Makes you more stupid," but we figure that if you have read or have written enough of those kind of posts that your language processing skills will be shot anyway.

Who knew that just contributing a post to the Cavalcade of Risk could be so, well, risky?

We won't keep you waiting any more. We've presented all the contributed posts below in the chronological order we received them in the dynamic table below. You can click the column headings to sort them either from best to worst or vice versa if you'd prefer to filter the wheat from the chaff. Non-memo reading clueless goons, you asked for it....