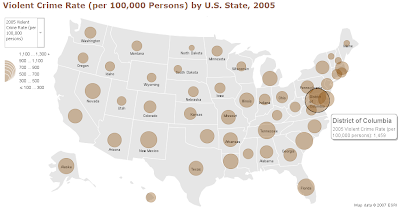 Question: Which region of the United States has the highest rates of violent crime?

We found the answer to the question above by taking the FBI's data for Crime in the United States 2005 and creating the map above using the data visualization tools available at IBM's Many Eyes web site. The map and full dataset are available here (the map may take some time to load).