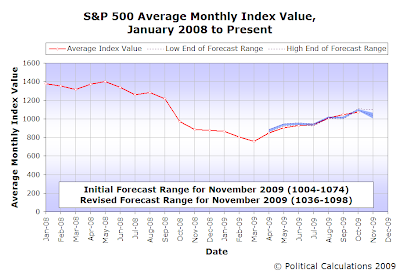 When we last considered what the future held for the S&P 500, we didn't have enough data to confirm which point of time in the future to which investors would appear to have shifted their focus during the month of October 2009. Observing that the forward-looking focus of investors had indeed shifted from the first quarter of 2010 to either the third or fourth quarter of 2010, we constructed our forecast for where average stock prices would go in November 2009 by blending the results of our math together.

Today, with an additional week of data, it would appear that investors have shifted their time focus to the fourth quarter of 2010, with changes in the year-over-year rate of growth of the index' dividend futures contract expiring in December 2010 now providing the basic signal driving stock prices.

With that knowledge, we can now refine our forecast for where average stock prices will go in November 2009. Using the typical range of amplification factors that correlate the magnitude of changes in the rate of growth of stock dividends per share with changes in the rate of growth of stock prices that we've observed since 2001, we find that the full range for where the average of stock prices for November 2009 will fall is between 959 and 1098. Following our usual practice of indicating either the upper or lower portion of the full range we calculated for our actual forecast, we would narrow that down to 1036 to 1098.

The table below presents our previous prediction and the corresponding stock price forecast values:

Some changes to note which account for the upward shift in our forecasted range for the S&P 500 in November 2009:

We'll also note the much wider range of potential values for our November 2009 forecast as compared to our forecasts for previous months. This outcome is the result of the underlying data in our calculations, which is based on the year-over-year change in the rate of growth of the S&P 500's trailing year dividends per share. In a nutshell, the value of the change in the expected year over year growth rate of dividends per share for 2010Q4 is much larger than that for 2010Q1 (the previous period of investor focus), which results in a much wider range of anticipated future stock prices when multiplied by our amplification factors.

We would anticipate that our forecast range will narrow once again as we move past the trailing year data containing period of crisis that led to such an exaggerated difference from the typical values we observe.