It's Thanksgiving week in the U.S. and here at Political Calculations, that means one thing: it's time for our annual Turkey Week!

What's Turkey Week, you ask? It's our unabashed celebration of the big business of feeding hungry Americans the one item that roughly 82% of them will consume on the fourth Thursday of November: turkey! That is, if WikiAnswers is to be believed.... 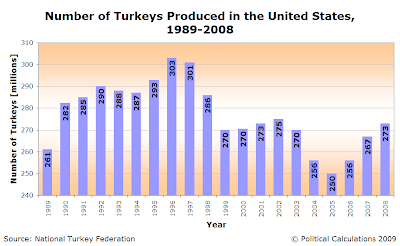 But how many turkeys are produced each year in the U.S. to satisfy the annual turkey craze of Americans? Once again, we've turned to our most valuable turkey related information resource, the National Turkey Federation, to find out. Our lead chart of Turkey Week 2009 presents what we found out from the NTF for the number of millions of turkeys produced in the United States for each year from 1989 through 2008!

We see that in 2008, the number of turkeys produced in the U.S. rose to 273 million from 268 million the year before, representing a percentage increase of 2.2%. What's more, we find that this number is the same as that for 2001. We find that informational tidbit interesting because both years represent years in which the U.S. economy was in recession. Perhaps even more interesting is that we see that we see turkey consumption drop as the economy improved from 2003 to 2005, only beginning to improve again in 2006, the same year as when the U.S. housing bubble began to dissipate.

Note: In the positive GDP growth rate years of the 1990s, turkey consumption boomed due to its perceived health benefits as a low-fat source of protein during the low-fat diet craze of the era. But then, we see turkey production booming in 1990 over 1989's level, which again coincides with a recession year.

Perhaps that's to be expected though, as one might expect people to turn to traditional or comfort foods at times of economic stress.

As the recession has continued into 2009, we were next curious to see how that might affect the price of turkey in the United States. We'll pick up the story with 2009's Thanksgiving grocery bill tomorrow....