Political Calculations
Unexpectedly Intriguing!
January 27, 2010
How'd That Stimulus Package Work Out For You?

With President Barack Obama's first official State of the Union address scheduled for this evening and as it happens, nearly a year after President Obama's first address to a joint session of the U.S. Congress, we thought we'd take a look back at the biggest single achievement of the first year of his administration and a principal reason for his first major address as President: the American Recovery and Reinvestment Act of 2009. Or as most people have come to call it, "the stimulus package." Namely, how well did it work in stimulating the U.S. economy?

Let's revisit what the President said and then we said on the topic back on 10 February 2009:

In his response above, President Obama named three things he would use to determine if the economic spending plan he's currently promoting will have been effective:

Now ask yourself: Would any of these things not happen anyway? Even without such a massive spending package? And if these things would happen anyway, how is their happening proof, in any way, that the government's proposed nearly trillion dollar spending spree is what worked to make them happen?

No, President Obama just doesn't understand money. Otherwise, he would know that he would have a very easy way to demonstrate that the "investing" he wants to have happen via the so-called "stimulus package" is producing positive returns for the taxpayers of the United States. He would see the benefit of the proposed spending in the form of higher tax collections stemming from increased economic activity.

We then went on to create a tool to run the numbers for what kind of tax collections it would take for the President to be able to claim that the stimulus package really worked. Here was our conclusion:

Doing the math, we find that in order for the spending of the stimulus package to be judged to be successful, it will need to increase federal tax collections over what they would be otherwise by at least $15,888,600,000 (just a bit under 16 billion USD).

See? Not so hard! Of course, if President Obama were smarter about money, we're sure he would have worked this out on his own! And now that he only has to have federal government tax collects rise over what they would be otherwise by just $16 billion, surely the President will be able to trumpet his grand achievement!

So how did those tax collections work out for President Obama? Let's answer that today by comparing what the White House's Office of Management and Budget projected would be the total of tax receipts in the United States for Fiscal Year 2009 against what the U.S. Treasury reports to have been the actual total of tax receipts over the period: 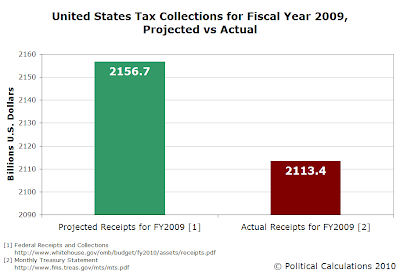 Noting that U.S. fiscal year 2009 ran from 1 October 2008 through 30 September 2009, we find that total tax collections fell some 43.3 billion dollars below where they were projected to be for the year. It would seem then that the stimulus was ineffective.

But before we draw that conclusion, let's look to see the quarter-by-quarter breakdown of the federal government's tax collections and match that against the timing of the expenditures for which it provides. After all, the stimulus bill didn't pass until the end of February 2009, with much of the associated spending not scheduled to take place until much later. Here's our chart showing the quarter-by-quarter tax collections from the first quarter of Fiscal Year 2009 through the available figures of Fiscal Year 2010: 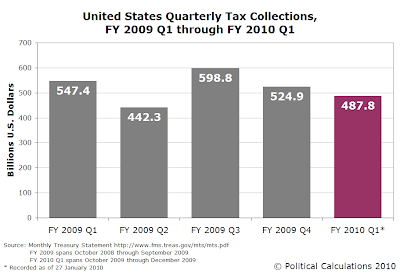 Using the federal government's tax collections as a proxy for the performance of the U.S. economy, we see that the second quarter of Fiscal Year 2009 (January through March 2009) was the worst, followed by a strong increase in the third fiscal quarter (April through June 2009), but has fallen back since. Looking at a year-over year comparison between Fiscal Year 2009's first quarter and Fiscal Year 2010's first quarter, we confirm a significant decline has occurred during President Obama's first year in office, despite the President's stimulus spending initiatives. Could most of the benefit of the stimulus spending have occurred from April through June 2009?

Here's how Keith Hennessey described the timing of the stimulus' package spending initiatives, which perhaps explains why that's not the case (emphasis ours):

Fortunately, CBO Director Doug Elmendorf just gave a presentation titled "Implementation Lags of Fiscal Policy" to the IMF's conference on fiscal policy. All of the following data are from his presentation.

The problem is that only 11% of the first line (discretionary spending) will be spent by October 1 of this year. In contrast, 31-32% of the entitlement and tax cuts lines will be out the door by that time. (I have questions about the speed of the entitlement part. The bulk of that is Medicaid spending, and it's not clear to me that a Federal payment to a State means the cash is immediately flowing into the private economy.)

If we extend our window to October 1, 2010, then less than half the discretionary spending will be out the door, while almost 3/4 of the entitlement spending and all of the tax cuts will be out the door and affecting the economy. The largest part of the stimulus law is therefore also the slowest spending part. This is fine if you’re trying to increase GDP growth over the next 2-4 years. If you're going for short-term GDP growth, it makes no sense.

We find then that the President's signature economic achievement to date has failed to achieve its stated purpose of stimulating the U.S. economy.

I think it would help if your article had clarified that the projected tax receipts for 2009 had already taken into account the projected reduction in tax receipts from ARRA. That's not the way I originally interpreted it, and it took some digging to find where in the linked PDF it actually said the projection included the impact of ARRA. If one misinterprets it the way I did, then saying tax collections are down in a year in which there were cuts to tax rates seems tautological.

As our reader notes, the comparison of projected vs actual tax collections do indeed incorporate the projected effects of the ARRA stimulus package spending and tax cuts. As such, it's as close to an apples-to-apples comparison as we can get!