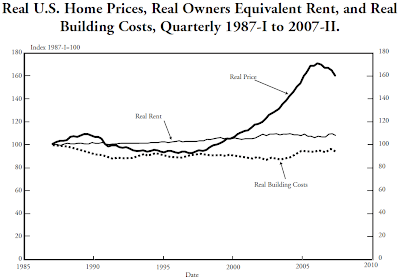 When exactly did the U.S. housing bubble begin?

Better yet, can you tell from the Case-Shiller Home Price Index when it began?

Here's what James R. Hagerty found when he asked the question of two housing and mortgage industry experts in November 2009. First, he asked Edward Pinto:

Edward Pinto, a mortgage-industry consultant who was the chief credit officer at Fannie Mae in the late 1980s, argued in a WSJ op-ed essay Friday that "most agree that the housing bubble started in 1997."

I asked Mr. Pinto why he chose 1997. He pointed to a chart of long-term home prices patched together by Robert Shiller, a Yale economist. The chart shows inflation-adjusted house prices starting to move up sharply in the late 1990s.

Mr. Pinto believes misguided government efforts to promote homeownership were largely to blame for the bubble. He particularly points to the 1992 legislation that required the government-backed mortgage investors Fannie Mae and Freddie Mac to guarantee more loans for people with shaky credit and an inability to make substantial down payments. That legislation also created a weak regulator for Fannie and Freddie.

He next asked economist Tom Lawler:

Tom Lawler, an independent economist who worked at Fannie Mae from 1984 to 2006, says few housing gurus think the bubble began as early as 1997. In his view, the bubble began around 2002. The collapse of the tech-stock bubble in the year 2000 prompted many people, searching for other types of investments, to focus on real estate. The Federal Reserve’s policy of keeping interest rates unusually low made property investments even more attractive. Once house prices reached levels that most ordinary people couldn’t afford, Wall Street and mortgage banks responded by relaxing lending standards further with loans that kept payments very low in the initial years and let people lie about their incomes. That helped push home prices up much higher till the bubble began to deflate in 2005 and 2006.

For his part, Case-Shiller House Price Index co-creator Robert Shiller identified 1998 as the beginning of the boom in U.S. house prices in a 2007 paper, in which he describes how rising house prices became a widespread phenomenon in the United States:

The boom showed its first beginnings in 1998 with real (inflation-corrected) home price increases first exceeding 10% in a year on the West Coast, in the glamour cities San Diego, Los Angeles, San Francisco and Seattle. The incipient boom then attracted only moderate attention since it was confined to the West Coast, and the cumulative price gain was still not dramatic. But the boom quickly spread east, with 10% one-year real home price increases appearing in Denver and then Boston in 1999. These cities kept on appreciating at a high rate.

As years went by, new cities started seeing substantial real home price increases. Even though it was a recession year, Miami, Minneapolis, New York and Washington, D.C., began to see 10% real price increases in 2001. Then there arrived the late entrants, who compensated for their delay with the intensity of their price boom.... The result of this succession of booms, in so many places has been a massive increase in national home prices over a period of nearly a decade.

Shiller's description gives us an idea of how rising house prices propagated across the U.S., but it doesn't really tell us when it changed from a local or regional phenomenon into a national one.

Worse, the Case-Shiller House Price Index, by itself, is not able to be used to identify if an economic bubble in the U.S. national housing market exists, only the potential that one exists. An economic bubble, by our operational definition, "may be said to exist whenever the price of an asset or assets that may be freely exchanged in a well-established market first soars then plummets over a sustained period of time at rates that are decoupled from the rate of growth of the income that might be realized from owning or holding the asset(s)."

For an asset like houses, the income that might be realized from owning or holding the asset is called rent, for which Shiller utilizes the inflation-adjusted Owner's Equivalent Rent measure produced by the U.S. Bureau of Labor Statistics.

There's a problem though when we adjust housing prices for inflation as is done for the Case-Shiller house price index. The Consumer Price Index doesn't incorporate actual changes in housing prices over time. Instead, it uses the Owner's Equivalent Rent measure to represent the housing component of consumer prices (it's the largest single component of the measure), so using this data to correct house prices for the effects of inflation fails to account for the actual changes in house prices.

You see the vicious circle! The Case-Shiller real house price index isn't really telling us what we'd like to think it is.

But what would be a better method for determining whether house prices might be in a bubble? Is there a way to detect a bubble forming in its earliest stages?

We think we've developed a better method, which is in part based upon our observations of age and income driven spending. What we found is that personal spending for housing was a very strong function of personal income.

That observation gives us an alternative way to determine how much Americans of a given income spend on housing and given the strong correlation between income and housing expenditures, we can substitute personal income in place of the measure of rent used by the federal government. We can then plot non-inflation-adjusted house prices against that personal income, which would give us insight into not just whether house prices have decoupled from the economic fundamentals supporting them, but when as well. 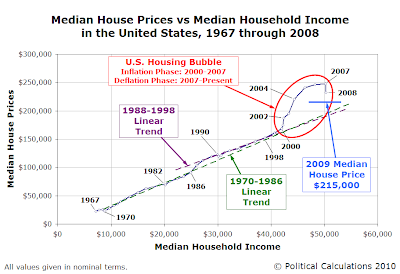 We did just that with median house prices and median household income in the United States since 1967. What we find from our chart is that the U.S. housing bubble clearly began in 2000, with a distinct deviation away from the two otherwise linear trends that we observe in the data.

The first of those linear trends runs from 1970 through 1986. We can likely attribute the shift we observe in the linear trends we observe from 1986 to 1988 to the Tax Reform Act of 1986, which "increased incentives favoring investment in owner-occupied housing relative to rental housing by increasing the Home Mortgage Interest Deduction."

Those changes however did not contribute to the building of the housing bubble, which we confirm through the linear trend that appears to have held from 1988 through 1998 (or 1999 as the case may be - in generating the linear trendline for this period, we utilized Shiller's proposed 1998 date as the cutoff, but it doesn't make much difference).

We do observe a dramatic break in that latter linear trend beginning in 2000. That corresponds with the peak of the stock market bubble, which began its deflation phase following August of that year, which continued into early 2003.

What we then suspect is that Tom Lawler's basic theory of the housing bubble is correct, but his timing is off. People didn't wait until 2002 to begin pulling money out of stocks to put toward housing - they started in 2000, just as the stock market bubble began deflating.

And we now have what the Case-Shiller house price index doesn't provide: a tool we can use to determine if house prices are genuinely supported by fundamental economic measures that can quickly identify if such a bubble exists on a national scale.