Believe it or not, it has been more than a year since we last provided a forecast for the level of GDP in the U.S. That's mainly because we've focused instead upon developing our model for anticipating where the stock market would go, but with news that the growth rate of real GDP reached 5.7% in the fourth quarter of 2009, we thought it might be fun to go back and fill in the gap for the interim!

What we've done then is to update all our quarterly data for GDP to be expressed in terms of chained 2005 U.S. dollars, to agree with the latest available data from the Bureau of Economic Analysis, and used it to recreate the GDP forecast according to Steve Conover's Climbing Limo method and our own refinement of that method, the Modified Limo.

Both methods utilize the GDP data from previous quarters for their forecasts. The Climbing Limo method then projects where GDP will be three quarters after the most recently concluded quarter, while the Modified Limo only looks forward to the next quarter. In a very real sense, the two Limo methods use the most accurate model of the future U.S. economy possible, the U.S. economy itself from the recent past, and applies the concept of inertia to it, projecting where it will be based upon the path it has been taking. 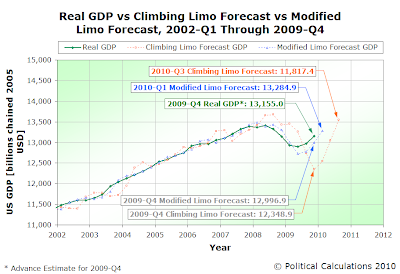 Meanwhile, we observe that our Modified Limo approach minimizes the extent of much of these wild gyrations. What we see is that the Modified Limo forecast more closely approximates the actual changes taken by the U.S.' GDP.

The table below details the deviations we observe between the Climbing Limo and Modified Limo forecasts and the actual level of GDP recorded by the BEA as a percentage of the actual level of inflation-adjusted GDP. The data for the fourth quarter of 2009 is based on the BEA's advance estimate of GDP for that quarter (the "final" revision of that data will be released in March 2010.)

It would seem that our Modified Limo approach does a pretty good job in anticipating where real GDP will really go. So, to make it interesting, we're going to add our GDP forecasts to our list of predictions that we evaluate using our unforgiving plus-minus scoring method. So, for 2009-Q4, we'll anticipate that the final revised figure for real GDP that will be released in March 2010 will be within 2.0% of our predicted value of 12,996.9 billion chained 2005 U.S. dollars.

The reason why goes to the data needed to create the Modified Limo forecast. Here, the Modified Limo method uses the "finalized" data for GDP from the previous quarter to create its forecast, which won't be available for the fourth quarter of 2009 until March 2010. The 13,155.0 billion USD figure currently indicated by the BEA in its advance release is based upon still incomplete information, which makes it subject to change.

Fortunately, the timing on that works out perfectly for us - at the same time when we'll find out if our previous GDP prediction was correct in March 2010, we'll be able to create a new one to replace it!