Now that we've established that the bubble in U.S. housing markets began in 2000, we thought we might turn our attention internationally to see if similar patterns appear elsewhere. Our first stop, by request, is England! 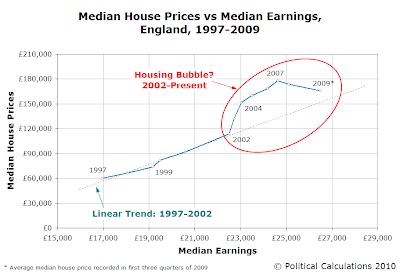 What we've done is to extract data for the median house prices in England and use data indicating the ratio of median house price-to-median earnings to calculate the corresponding median incomes for each year from 1997 into 2009. Both sources of data are available from the British government's live tables on the housing market and house prices.

We next plotted the median house prices against our calculated median earnings figures. In doing that, we find that England has indeed seen a housing bubble form, which began in 2002. We see the inflation phase of the bubble grow until peaking in 2007. Since then, the English housing market has been in a deflation phase, which appears to continue into the present. The bubble in English housing prices is therefore not yet finished.

On a side note, we're disappointed that we didn't encounter data extending further than 1997 into the past for England. Although we have six points of annual data, which is four more than the two points of data needed to draw a straight line (assuming all the data points sit on, or are very close to that line), we'd much rather have more data for the sake of determining how firmly established the observed linear trend was prior to the inflating of the English housing bubble.

We also find it really interesting that Wikipedia's article on the British housing bubble indicates it is believed to have begun in 1997, and only later began growing explosively in 2002. As best as we can tell, rising housing prices were fully supported by rising incomes during the period from 1997 to 2002. As such, the growth in housing prices during this time may have been robust, but does not constitute a bubble as earnings were growing fast enough to support the rising house prices.