How many pages does it take to record the U.S. federal tax code?

It's often been remarked that the growth in the complexity of the U.S. tax code can be measured by how many pages it takes to document all the things that specify how much federal taxes any single individual, household or business in the United States may have to pay. Kay Bell recently featured the chart we've presented above from the CCH Standard Federal Tax Reporter, which illustrates just how many pages of the CCH Standard Federal Tax Reporter would be required to contain all of the U.S. federal tax code. 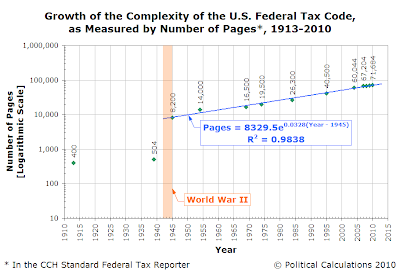 But that wasn't good enough for us, so we created our own graphical version of the chart's data, so we can better see how the U.S. federal tax code has changed since the U.S. implemented the income tax in 1913, when the entire federal tax code could have been contained in a single 400 page textbook.

What we find is that the tax code really didn't explode in complexity until World War II, which we observe in the large jump from being just 504 pages in length in 1939 to 8,200 pages in 1945, the final year of the war. Since then, we find that the number of pages in the U.S. federal tax code have grown at a near-steady exponential rate of 3.28% per year, which as of 2010, means that the U.S. tax code has ballooned to be 71,684 pages in length!

But wait, there's more! Because the tax code has grown consistently at this steady rate since 1945, we can project how much the complexity of the federal tax code can be expected to grow in the future.

Using this information we can create a tool that can either estimate the number of pages in the U.S. federal tax code between 1945 and 2010 or project how many pages can reasonably contain the federal tax code in the future, provided that U.S. politicians and bureaucrats continue to add to its complexity at the same rate they averaged from 1945 up to 2010.

That assumes though that today's politicians and bureaucrats aren't compelled to do something radical that might cause the complexity of the U.S. federal tax code to really explode, much like what happened back in the 1940s because of the requirements of funding World War II.

Just what radical change that might be we'll leave as an exercise to our readers....

The CCH reporter is not a good metric because it accumulates. It has repealed and replaced statutes, cases and rulings from all levels, so that an over-ruled case may still be noted.

You would need a non cumulative source like the United States Code, and the Code of Federal Regulations.

We're of two minds here. While our reader is correct that the functional portions of the U.S. federal tax code would occupy fewer pages, the cumulative nature of the CCH Standard Federal Tax Reporter makes it a good measure of the extent to which the various portions of the federal tax code have been modified or altered over time. As such, our thinking is that its length better communicates the degree to which the the U.S. tax code has been affected by the series of complex changes that have taken place within the code through the years.

After all, given how tax law works, it's not like a previous version of the statutes or how they're interpreted just disappear when they've been modified or superseded. The ghosts of tax law past can haunt for decades....