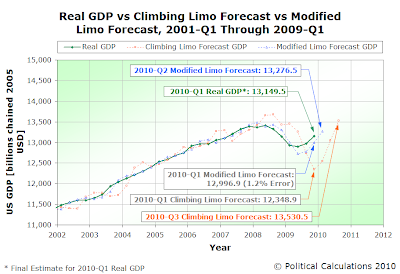 Now that the U.S. Bureau of Economic Analysis has finalized its GDP data for the fourth quarter of 2009, we can now officially project where the nation's inflation-adjusted GDP will be for the first quarter of 2010.

Using our Modified Limo method of forecasting real GDP, we anticipate that the United States' inflation-adjusted GDP for 2010-Q1 will be within 2.0% of $13,276.5 billion, as expressed in terms of constant 2005 U.S. dollars.

Going back to our projection of where the U.S. inflation-adjusted GDP would be finalized for the fourth quarter of 2009, we came within 1.2% of the final figure of $13,149.5 billion chained 2005 U.S. dollars. We had anticipated that the final GDP figure for 2009-Q4 would be $12,996.9 billion in our earlier projection based upon the finalized value for real GDP in 2009-Q3.