In April 2009, we began offering forecasts at the beginning of each month to anticipate the range of where the average price level of the S&P 500 would fall during that month. One year later, we've been correct 7 out of 12 times, and if not for the poor handling of Federal Reserve Chairman Ben Bernanke's renomination process in January 2010, it would be 8 out of 12. (Ed. Are you *still* bitter about that? Yes. Yes we are. It's hard enough to correctly predict where stock prices will be without having a bunch of clod-hopping politicians in Washington D.C. contributing to the noise of uncertainty!) 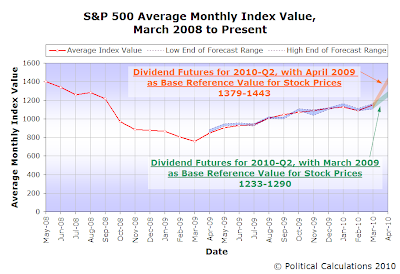 Over that time, we've discovered that there are some anomalies that appear in the stock market data we use to create our predictions that are likely to result in our predictions missing their mark. Namely, when the historic stock prices we use in our mathematical model of the stock market significantly alter their trajectory in a short period of time, either by peaking or by passing through a trough.

In those situations, we adapt our analysis methods to work around the sudden change of direction to minimize the effects of the anomaly. We do this by shifting the base value from which we reference future stock prices from the average level of stock prices recorded 12 months ago to reference instead the average level of stock prices that were recorded 13 months ago. In practice, this technique allows us to smooth out what would otherwise be a sharp transition that can significantly skew the upper and lower limits defining our target forecast range.

The first time we did that was back in May 2009, where we issued a mid-month correction for our second-ever public stock market prediction using our then newly invented methods. Going over the historic data, we confirmed that the average level of stock prices used in the base reference values for our methods were indeed transitioning through a peak in May 2008. Using that peak value in our original forecast, we had initially anticipated that stocks would fall in a target range of 925 to 945, but revised that later to a range of 909 to 927 after shifting the base reference value for stock prices from May 2008 to April 2008 to accommodate the transition. The average level of stock prices recorded in May 2009 was 902.41.

Flashing forward to today, we find a similar historic anomaly in stock prices affecting our model's forecast range for stock prices. Looking back 12 months ago, we find that stock prices bottomed after declining over several months, followed by a rapid rebound.

In our model, without shifting the base reference value, we find that stock prices would shift upward rather dramatically, which is indicated in our chart above by the orange forecast range, which if unadjusted, would anticipate stock prices for April 2010 falling into a range between 1379 and 1443.

It's a good thing it's April Fool's Day, because if you believe that, well... Gotcha!

Applying our base-shifting technique to account for the rapid transition in the historic reference values for stock prices, exchanging the year ago monthly average stock price figure in April 2009 with that for March 2009, we would instead project that the average of the S&P 500 in April 2010 will range between 1233 and 1290. These upper and lower limits are indicated by the green forecast range in our chart above.

If our past history of forecasting stock prices is any guide, even that lowered range will still shoot above the target. We think its likely that stock prices will average lower than our lower end of our projected range in April 2010.

There are other factors to take into account that would impact our forecast accuracy. For example, our prediction above is based upon investors focusing their forward-looking expectations for the future growth rate of dividends per share as defined by the dividend futures for the second quarter of 2010. It's possible that they're focused on a different point in time, but our source for the dividend futures data currently only extends them through the fourth quarter of 2010.

At this point last year, the same data source showed the next seven quarters into the future. It's like the world is scheduled to end on 17 December 2010.

There's also the ever-present effect of noise upon the data as well. While our forecast range accommodates what we consider to be "typical" noise levels, it doesn't account for more extreme noise events that might affect the level stock prices during the course of the month.