As expected, with no further increases in the federal minimum wage scheduled to take place in the near future, we find that both teens and young adults fared disproportionately well in the BLS' March 2010 employment situation report. 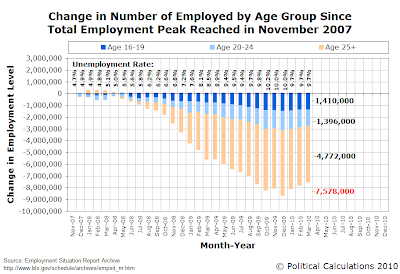 We confirm that result in our chart showing how the employment situation of both teens (Age 16-19) and young adults (Age 20-24) have fared with respect to those Age 25 or older since total employment levels peaked in November 2007, prior to the beginning of recession in December 2007.

We'll close by noting that is the exact reverse of the situation we observed throughout the period of time in which the federal minimum wage was being increased from 2007 through 2009, which is why we can now expect the teens and young adults who make up roughly half of all minimum wage earners in the United States to fare much better than others. Especially now that their potential employers no longer have to adapt their hiring activity to have to cope with additional increases in the federal minimum wage.