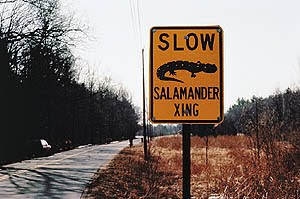 Each spring in Monkton, Vermont, thousands of salamanders migrate from the upland areas where they spend the winter to the lowland swamps where they breed. To do that however, requires they cross Vergennes Road, where studies by a state wildlife biologist suggests that only about half of them make it across.

Thanks to a $150,000 grant taken from the taxes collected from Americans in places like Hawaii, Florida and Idaho, help is on the way!

The Monkton Conservation Commission announced Thursday that it has won a $150,000 state grant to install at least one, possibly two, culverts under the road so at least some amphibians, reptiles and small mammals can safely pass between uplands southeast of the road and an important swamp northwest of the crossing.

When completed in 2011, the project will be the first wildlife-crossing retrofit of a Vermont highway....

The award came from $3.8 million in federal funds the state is required to spend on transportation enhancement projects — typically bike and pedestrian paths, landscaping and the like. This is the first time the program has awarded money for a wildlife crossing.

But wait! Weren't there other ways to put these federal tax dollars to work to provide greater benefits to more people?

Well, yes, but they apparently weren't as important. You see, it's really about public safety:

Teams of volunteers turn out on some back roads around the state on warm, wet spring nights to ferry migrating salamanders to safety. Vergennes Road is too busy to be safe for a phalanx of volunteers, so the Conservation Commission proposed to add culverts under the road.

Which explains how the Monkton Conservation Commission was able to score Vermont's first ever federally-funded wildlife crossing for a state road. Because it makes it possible for the people of Monkton, Vermont to apply their own money to other, even more important uses.

How do we know? They told us so:

The Monkton Conservation Commission had applied for $225,000, which is enough, with private matching funds, to install the two highest-priority culverts. Parren said he is hopeful residents can raise enough private funds to meet the two-culvert goal.

Doing the math for the proposal, two culverts would be expected to cost about $450,000, with $225,000 proposed to come from the federal government, matched by $225,000 provided by the generosity of the residents of Monkton, Vermont, assuming a 50-50 split.

State wildlife biologist Steve Parren's comment suggests that the people of Monkton, Vermont didn't have to apply for any federal money to construct at least one of the culverts on their own, if they really cared about the public safety of both salamanders and people. But they chose not to do so, seeing an opportunity to score money for the project from the federal government, freeing up their own money for other things.

“We are absolutely thrilled,” said Chris Slesar, chairman of the conservation commission. “We understood that funds were limited, and competition would be fierce. I couldn’t be happier.”

We bet he's happy! Sadly though, there's no word yet on the emotional state of the taxpayers of Hawaii, Florida and Idaho whose tax dollars provided so much of the project's funding.