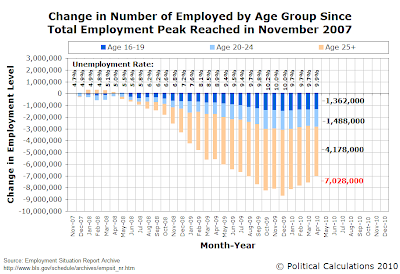 Nearly 8.7% of that increase was represented by teens, which is significant since teens account for just 3.26% of the entire U.S. workforce!

Meanwhile, the job market for young adults Age 20-24 turned south, as 92,000 fewer jobs existed for individuals in this age group in April 2010 than did in March.

That's a surprising outcome especially given what we've observed following the six months businesses took to fully adjust to the latest increase in the federal minimum wage back in July 2009. Here, since both teens and young adults were disproportionately affected by job loss throughout the recent series of minimum wage increases that began in 2007, we should expect that these groups will now become disproportionately reflected in the numbers of those finding jobs, now that no further minimum wage hikes are scheduled.

After all, when the level of minimum wages are being increased, it doesn't make sense for employers to hire these comparatively unskilled, inexperienced and uneducated workers if they'll be compelled to give them raises in the very near future without their having to increase their productivity in return. With no further increases in the wages for the least productive portion of the U.S. workforce being mandated by the U.S. government, the relatively larger pool of available workers in the Age 16-19 and Age 20-24 age brackets should then be reflected in the numbers of those finding jobs today.

That we only see that occurring for teens in April 2010 suggests that young adults are running into some other factor negatively impacting their ability to find work.

Or perhaps it's just an anomaly in the survey of workers, which we'll see go away in future employment situation reports. Only time will tell.