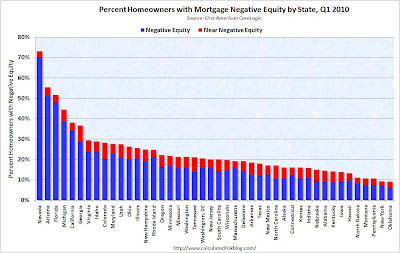 Calculated Risk reported earlier this week that 11.2 million properties in the United States were in negative equity territory as of the first quarter of 2010, meaning that their current estimated value is less than that recorded when their owner's mortgages were written. Our lead chart today, borrowed from CR, shows the state by state breakdown by the percentage of homeowners "underwater" on their mortgages, or nearly so.

We wondered if United States President Barack Obama was among them.

To find out, we went back into our previous analysis of the value of the President's primary residence in Chicago, Illinois, and updated it using the Federal Housing Finance Agency's latest revised data for how housing prices have changed in the Chicago metropolitan area over time. (Note: the agency has changed its name since our previous analysis - it was known as the Office of Federal Housing Enterprise Oversight back in October 2008.)

Using that revised and updated data, we found that the value of President Barack Obama's Chicago house is nearly $500,000 underwater compared to the amount he paid for it back in the second quarter of 2005. 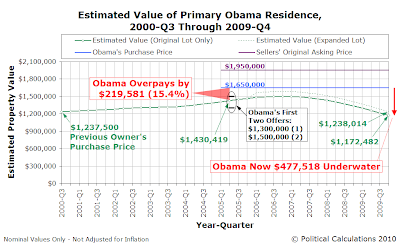 We note that then Senator-elect Barack Obama's first two offers for the house of $1,300,000 and $1,500,000 were consistent with this estimated value, as well as the value of similar properties in close proximity to the house.

If accurately reported at the time, this housing transaction would have provided the clearest indication that American voters would have had before the 2008 election of then presidential candidate Barack Obama's tendency for extremely wasteful spending where his own finances were concerned, a trait we now confirm also applies to the nation's public finances.