Political Calculations
Unexpectedly Intriguing!
17 May 2010
Of Cows, Subsidies and Amtrak

Amtrak, the heavily-subsidized, government-owned passenger rail monopoly in the United States, is trying to go green by switching one of its lines, the Heartland Flyer, to run on a special biodiesel blend that includes beef byproducts.

Really. We're not making this up! Miranda Marquit reports:

In an effort to create a greener train, Amtrak has unveiled the Heartland Flyer, which is designed to run on a special biodiesel blend that includes beef byproducts. The idea is to reduce hydrocarbon and carbon monoxide emissions by 10% each and reduce sulfates by 20%. Amtrak also claims that particulates will be reduced by 15% with the help of this new fuel mix.

However, the train won't be running solely on cow power. Discover reports on how Amtrak will use the fuel:

The Heartland Flyer uses about 100,000 gallons of diesel fuel each year to move 84,000 people. For this one-year test run, Amtrak will replace 20 percent of that fuel with biodiesel, produced from tallow from Texas cows. The fat from the cattle, which is normally used to make animal feed and soap, will now instead help power a train.

While the new biofuel can be used on standard train engines, the Heartland Flyer has been given new parts so that it is possible to determine how much damage the biofuel is inflicting on the train over the course of a year. The Flyer is only expected to run for a year, between Oklahoma City, Oklahoma, and Forth Worth, Texas, and then the engine and the train's performance will be evaluated.

So, let's start racking up the cost to the taxpayer here for this grand plan for the future of rail travel in the U.S. USA Today reports that as of 2008, the average Amtrak passenger already benefits from a government subsidy of $32 per passenger, which makes it possible for the U.S. only national passenger rail service to operate despite continual, chronic losses.

A good portion of that taxpayer subsidized cost of operations goes toward buying fuel. Here, since the Heartland Flyer will be operated using a blend of regular diesel fuel and biodiesel, we'll run our numbers based upon what the Energy Information Agency indicates were the national prices of each in January 2010, which will give us a good idea of what such a scheme might cost if implemented nationwide.

At just 11 cents per passenger then, it doesn't seem like a bad idea. But wait - isn't biodiesel subsidized too? Why, yes, it is, or rather, it was, and it very likely will be again, if the current U.S. Congress has its way! To the tune of $1.00 per gallon.

That may not seem like much, but let's re-run our numbers from the previous table to account for the effects of that subsidy:

We find that switching to the B20 biodiesel blend will increase the per-passenger subsidy that taxpayers provide for each Amtrak passenger on the 206 mile one-way Heartland Express route to $32.27, just shy of a 1% increase. 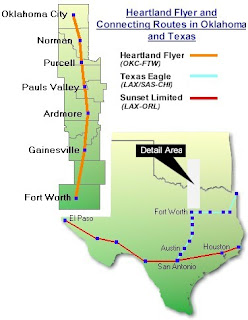 But that doesn't include the costs of the modifications it will take to make the train run on this special biodiesel blend or any of the expected higher maintenance costs resulting from damage caused by using the biodiesel fuel blend. Nor does it take into account the higher costs for products like soap and animal feed that consumers will see since the cow by-products that might otherwise be used for these products will instead be diverted into biodiesel production.

And since many of the cows that will be producing the by-products are fed with taxpayer subsidized crops, like corn, it doesn't include those costs as well and apparently doesn't provide much benefit for the environment either, the purported reason for the project. We probably shouldn't mention corn prices are themselves higher than they would be otherwise because of government mandates for ethanol production. Also apparently for the purpose of the perceived "benefits" of going green.

If you add it all up, the taxpayer-provided subsidy per Amtrak passenger from implementing this "improvement" is truly, quite generous.

And right now, all for the exclusive benefit of biodiesel producers, a select few cattlemen and optimistically (assuming no repeat passengers) some 84,000 people who don't have to pay as much out of pocket to travel the 206 miles between Oklahoma City and Fort Worth or back again as they might have had to otherwise.