Political Calculations
Unexpectedly Intriguing!
July 20, 2010
Does It Pay to Go to Law School?

The Frugal Law Student was wondering earlier this year if law school is really worth the extra cost it takes to go:

Given the economic crisis that is going on, the difficulty new lawyers are having getting jobs, and the soaring cost of law school, I’m doing a little analysis to see if law school is worth it for many prospective students. A lot of people go into graduate or professional school believing the debt and time spent will pay off in a more rewarding/higher paying career. While this may be happen for some, it’s by no means a guarantee.

The Frugal Law Student then runs through a couple of scenarios, but we thought that discussion might be improved by adding a visual touch, which we've done by creating charts that project the lifetime income-earning trajectories for a regular bachelor degree holder who enters the U.S. workforce at Age 22 versus a bachelor degree holder who goes on to law school before entering the workforce at Age 25. 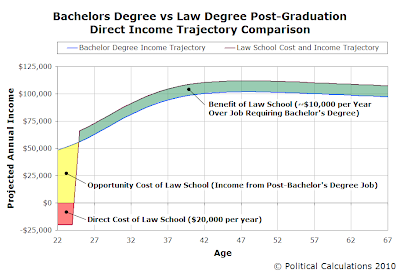 We've assumed that our hypothetical law student will earn an average of $10,000 more per year than our hypothetical average bachelor-degree holding income earner. That extra income comes at a cost however, in that we assume an average annual cost of $20,000 for law school, covering three years, in which our bachelor-degree holding law student also gives up the opportunity to have a real job. Law schools typically cost an average of $20,000 for state law schools, while private school's average $30,000 per year.

Attending a "prestige" institution can cost quite a bit more than those figures. 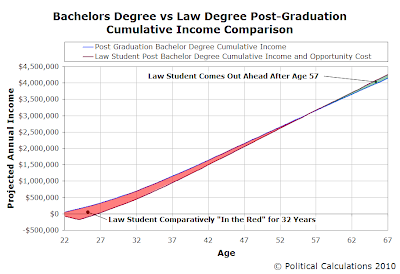 By comparison, our hypothetical bachelor-degree holder would see their salary range between $48,351 and $101,884.

But the real story is found in our cumulative comparison between the income earned by a bachelor-degree holder and the additional direct cost and opportunity cost for a law student.

Here, we find that even with the benefit of an additional $10,000 per year once they do enter the workforce, the lawyer doesn't catch up to the regular bachelor-degree holder until Age 57. And there is very little additional net benefit in the additional 10 years we show beyond that age to reach Social Security's full retirement age of 67.

We'll conclude with the bottom line offered by the American Bar Association's 2009 paper "The Value Proposition of Attending Law School", emphasis ours:

The combination of the rising cost of a legal education and the realities of the legal job market mean that going to law school may not pay off for a large number of law students. Dean David Van Zandt of Northwestern Law School estimates that to make a positive return on the investment of going to law school, given the current costs, the average law student must earn an average annual salary of at least $65,315.12 As the data above show, however, over 40% of law school graduates have starting salaries below this threshold. Thus, many students start out in a position from which it may be difficult to recoup their investment in legal education. Even students who do ultimately prosper over the course of a career face difficulties from high debt loads during the beginning of their career. High debt can limit career choices, prevent employment in the public service sector, or delay home ownership or marriage. In short, going to law school can bring more financial difficulty than many law students expect.

The lack of financial return, of course, does not mean that it is not valuable to go to law school. Many lawyers receive intrinsic benefits from a satisfying career that cannot easily be quantified. It does mean, however, that students should think twice before going to law school simply for the money. All too often, students who bank on reaping a positive financial return from law school lose out.