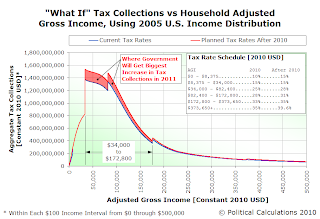 Less that a couple of weeks ago, we considered the potential implications for poor and middle-class taxpayers if the U.S. Congress decided to punt instead of taking action on preventing the tax cuts passed in the Jobs and Growth Tax Relief Reconciliation Act of 2003 from expiring at the end of 2010.

After all, it's not like the leadership of the 111th United States Congress will get around to passing a budget on account of "deficit concerns", so why wouldn't the current majority party in the Congress attempt to play political blame games with the minority party and get rid of the hated Bush tax cuts once and for all, lock, stock and barrel, for the same stated reason?

But in doing our own analysis, we only considered the impact of the change in marginal tax rates that would take effect in 2011. We didn't consider the changes to standard deductions or the changes that were made in things like the child tax credit, to name just two features of U.S. tax law that changed in 2003.

Fortunately for us though, the Tax Foundation did! The Tax Foundation has unveiled the MyTaxBurden calculator, which is designed to do one thing: to help you determine what the impact may be to you should the Congress take one of the following three possible actions before the end of the year:

The user interface of the MyTaxBurden calculator is a bit involved, which is intended to accommodate a very wide range of possible factors that go into determining an individual's federal tax liability.

The data input fields are on the left-hand side of the web page, with the output data fields grouped by column on the right, based upon the three possible scenarios the calculator considers. The "Calculate" button is located below the input fields, which helps ensure users see all the potential options.

The descriptions of what data to enter and what output is provided are simple and clear. Although complex, we found it very easy to understand what kind of data we were supposed to enter as well as what the output results communicated.

We therefore find the compromise between a complicated user interface and the detailed results of the tool to be justified, especially given that completing a tax return is frequently even more difficult....

The tool does offer some features that streamline data entry for individuals depending upon their tax filing status. For example, individuals filing as Single can easily skip past the form input fields dedicated to dependent information, while those filing as either Married or Head of Household have additional options.

We're also fans of the tool's automatic update feature, which users have the option of disabling (by unchecking a box). This is a really nice touch, making it possible for users to change a number of fields without the distraction of having the output fields flicker and change with each edit.

On the other hand, if you want to run a series of "what-if" type calculations where you are just changing one input field, you can enable the automatic update feature and get quick results.

We assume our taxpaying household rents rather than owns their own home, so that helps us keep things simple as we ignored the fields for real estate taxes and for additional deductible items like the one for mortgage interest. Likewise, our Age 12 child assumption allowed us to also enter zeroes for both child care expenses and for college tuition.

The only extra line of data we entered was for state and local taxes, where we simply put the figure we found for a household earning between $50,000 and $65,000 in the 2008 Consumer Expenditure Survey.

The screen shot below shows our data input and our results for each of the three situations considered by the tool: 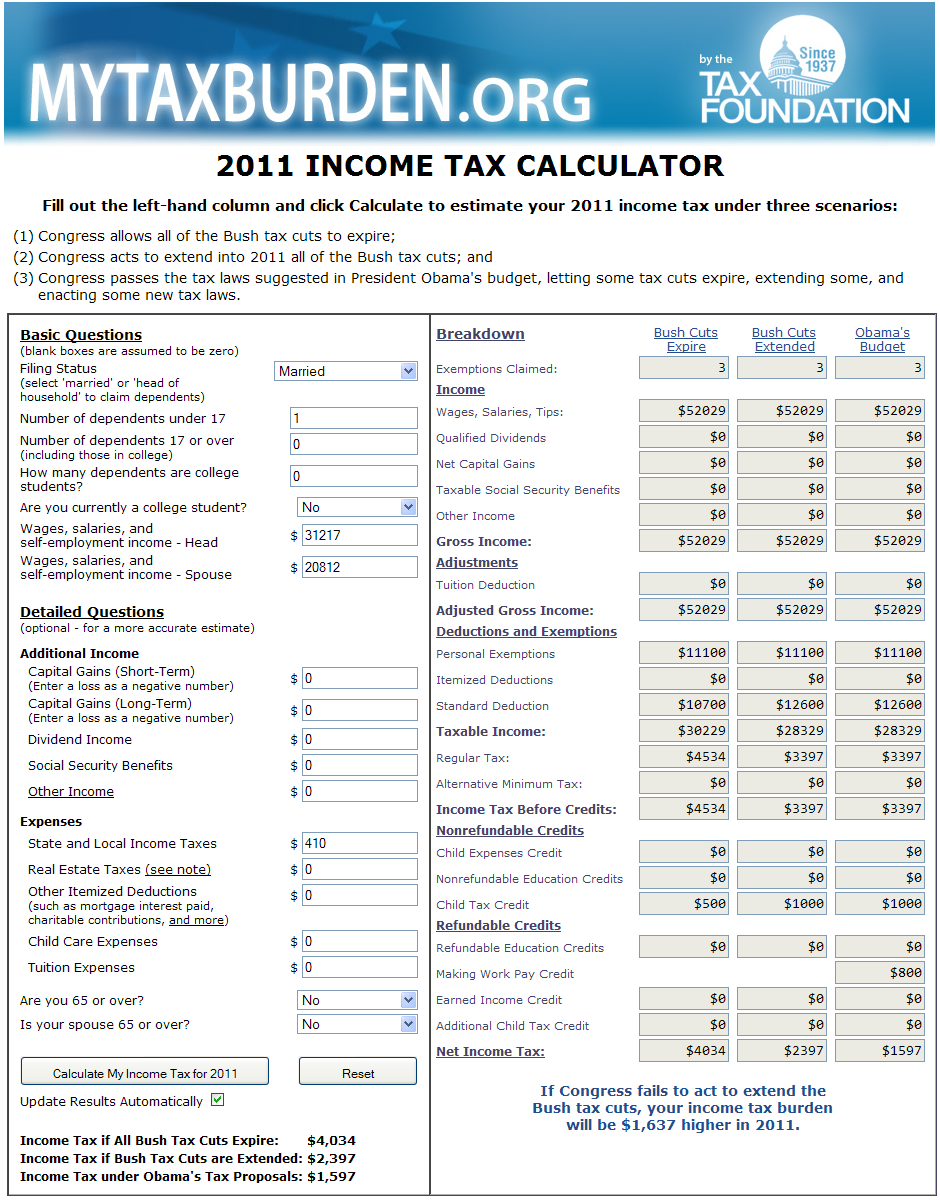 We found it very easy to consider the line-by-line impact between each of the three scenarios. We could quickly and easily see what was either the same or different between each, making it very straightforward to evaluate what the line-item or bottom line effect to our hypothetical household would be.

Speaking of which, for our test case, we find that the household would pay $1,637 more in 2011 than the $2,397 they would pay if the Bush tax cuts were extended. That's some 68.3% higher than what they would otherwise have to pay, thanks largely to the change in the standard deduction and the loss of the higher child tax credit that have been part of the U.S. tax code since 2003.

Meanwhile, President Obama has proposed extending the Bush tax cuts for most but high income earners, and even ups the tax credit giveaway by proposing that the "Making Work Pay" tax credit from his first two years in office also be extended into 2011, which would lower our hypothetical taxpaying household's bill to the federal government to $1,597.

As we noted before though, a U.S. Congress with "deficit concerns" so great they've declined to pass a budget to detail their spending could very well just let the President's "Making Work Pay" tax credit and all the tax cuts from 2003 expire, leaving our test case family with a tax bill of $4,034.

The bottom line? The MyTaxBurden calculator is a very well done tool that will allow its users to obtain high quality information of special relevance to them.

The MyTaxBurden calculator, created by Nicholas A. Kasprak, therefore earns our second-highest online tool design award: the Silver Standard. The only thing keeping it from earning our Gold Standard is its very time-specific focus - it will only produce relevant results for the individuals who might use it in 2010 and 2011.

Even so, we find those results are very relevant for users within that period of time, providing high quality information in a well-organized, easy-to-follow layout.

We find that the user interface, while a bit involved, does allow a great deal of customization on the part of the user. We do note that it will be beneficial for users to have a copy of their previous year's tax return to use for reference while using the MyTaxBurden calculator.