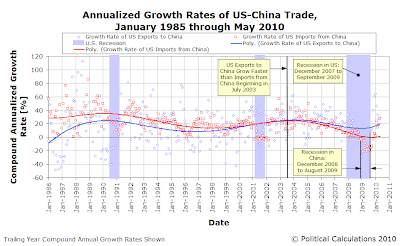 Our first chart today shows the annualized growth rates of U.S.-China trade from January 1985 through May 2010. What we find is that U.S. exports to China continues to grow, but at a slower rate than we saw previously. After spiking in January 2010, the year-over-year change in the rate of growth of U.S. exports has tailed off, and is perhaps stalling out. 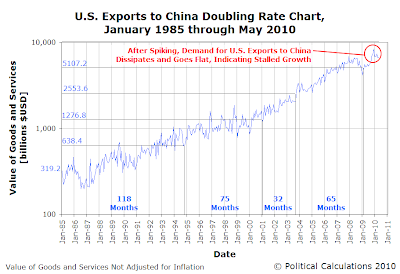 Since a growing economy demands more imports, what this observation indicates is that China's economy has been growing, but at a much slower pace than we saw at the beginning of this year.

We also see that the rate of growth of China's exports to the U.S. is also growing, indicating that the U.S. economy is growing, although at a much slower pace. We see that what had been a downward trend through the recession began picking up after September 2009, suggesting that the U.S. recession ended at that time. 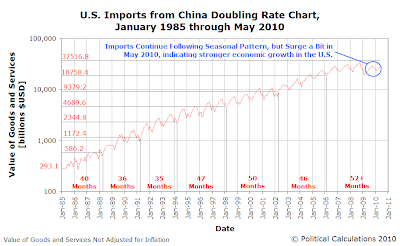 The timing of the end of the Chinese economic downturn and the coinciding apparent end of recession in the United States, along with the spike in U.S. exports to China at the beginning of the year coinciding with stronger GDP growth seen in U.S. in the first half of 2010 suggests that China's economy is perhaps driving the U.S. economy.

With that growth apparently stalling out in the second quarter of 2010, and assuming that China is indeed driving the U.S. economy, that perhaps explains much of what we've seen in the U.S. job market in recent months.

It would then appear that U.S. Treasury secretary Timothy Geithner is correct and the U.S. is not capable of driving global growth. It would seem that China is. And the U.S. is following.

Update 14 July 2010: We missed updating our comment for the Doubling Rate Chart showing U.S. Imports from China from a previous version of the chart, which has been replaced in our post above. The original incorrect version we posted is available here for reference. We also tweaked our commentary above to emphasize the stronger economic growth in the U.S. in the first half, rather than the first quarter, where we've indicated the altered text in boldface type.