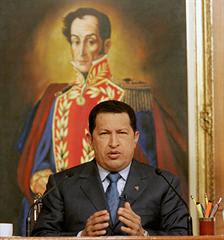 On Sunday, 25 July 2010, Venezuelan President Hugo Chávez threatened to cut off oil supplies from his nation to the United States.

Since Venezuela is the U.S.' fifth-largest supplier of petroleum products, having delivered just under 10% of the total amount of oil the U.S. has imported from outside its borders since January 2005, you would think that his threat to cut off that supply, combined with his historical animosity toward the United States, might cause a stir in the world's oil markets.

He likely thought it would too. After all, making such threats has worked for him in the past.

But the world's markets didn't react to the Venezuelan head honcho's latest threat to cut off his country's delivery of oil to the United States. At the very least, not in any noticeable way.

And we can show you why. First, let's take a look at the price per barrel Venezuela has received from the United States since January 2005. 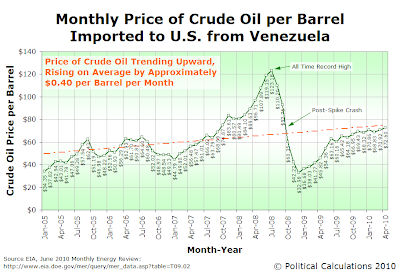 Since December 2008, oil prices began rising quickly again as the U.S. economy recovered somewhat from the crisis it went through at the end of 2008, before changing trajectory to rise at a more steady pace in June 2009, slowing converging in the months since with the long term rate of price increases observed since January 2005.

Our next chart shows how many barrels of crude oil that the United States has imported from Venezuela over the same period of time. 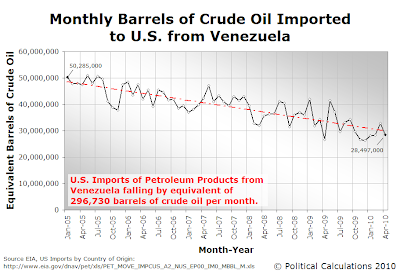 In this chart, we see that the United States has reacted to the generally rising cost of crude oil by generally reducing the amount of oil products that it imports. We see that the number of barrels of petroleum products that the U.S. has imported from Venezuela has largely fallen at a rate of 296,730 barrels per month over the period from January 2005 through April 2010. We also confirm that the amount of oil the U.S. has imported from Venezuela has fallen from 50.3 million barrels per month in January 2005 to just 28.5 million barrels in April 2010, representing a total reduction of 43%.

On a quick side note, we find that on average, each dollar increase in the price of a barrel of oil being imported from Venezuela coincides with a reduction in the quantity of barrels delivered of nearly 782,000.

Next, we'll look at what all that means for Hugo Chávez' monthly cash flow for selling his nation's oil to the United States. In our next chart, we've calculated the total cash the Venezuelan dictator receives each month from the U.S. 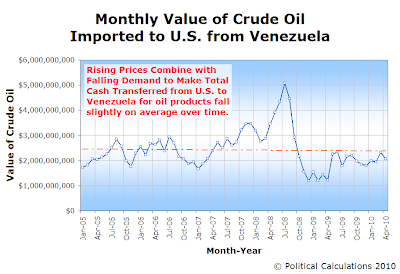 And what we find is that on average, Chávez' has received a very stable amount of revenue from his nation's oil sales to the United States of approximately $2.4 billion per month. Looking at the overall trend, we find a very small decrease over time.

We also see a boom and bust cycle. We observe that Chávez really benefited from rising oil prices from mid-2007 through July 2008, followed by a major deficit in his monthly revenue for oil after oil prices crashed. Since May 2009, we see that he has enjoyed a nice, steady monthly income from his oil sales to the United States.

But instead of being able to live in comfort on his nice, fixed income, the problem for Hugo Chávez is that he went on a bit of a spending binge during the boom times, using the immense wealth he gained when oil prices were high to fund the nationalization of many businesses and industries in Venezuela and to increase social spending to maintain popular support for his ever-tightening grip on power.

In turn, his actions have significantly reduced the amount of economic activity that the Venezuelan economy can generate compared to what it used to be capable of generating due to the increased risks of doing business imposed by increased inefficiency and corruption stemming from his centralized command of Venezuela's economy. 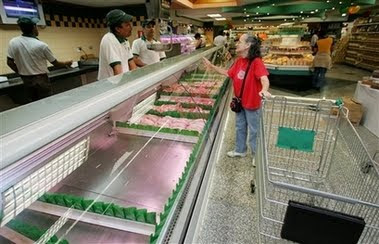 That malfeasance is evident even at a fundamental economic level, as shortages of even basic foodstuffs have become common as he has attacked businesses who cannot survive by supplying goods at the prices he dictates for "hoarding" wealth.

As a result, Venezuela is foundering because the cash it takes to support Chávez' actions has become increasingly scarce in recent months.

To deal with the consequences of his actions, Chávez has had to take some pretty extraordinary steps in recent months and weeks to keep Venezuela solvent, doing things like tapping the fund he set up to support domestic economic development to cover a shortfall in operating expenses for Venezuela's government-owned national oil production entity and concocting a deal with China to pay his nation's debt to that country with oil shipments.

Even with those deals, Venezuela tops the list of countries most at risk of defaulting on their debt as measured by Credit Default Swap premiums.

Ultimately, all these things contribute to why the attempt to influence world oil markets by threatening to cut off the supply he controls to his nation's largest customer fell so flat. The United States is estimated to absorb well over half of Venezuela's entire oil production, and the world knows how dependent Chávez has become on the money that trade brings him. The effort was clearly delusional.

We therefore find that given current circumstances, Hugo Chávez has become economically impotent. He simply cannot afford to deliver on his economic saber-rattling threats and expect to remain in power for long.

It is possible that he may still believe that his word holds sway over the world's oil markets. Here though, we should remember that we are talking about the same man who ordered that the remains of Simón Bolívar, the man who liberated much of Latin America from Spanish control in the early nineteenth century, be exhumed for testing and apparently, also for intimate conversations.

Then again, even serious whack jobs can create serious problems for other nations and world markets, especially if they really do have the means to turn off the spigots of oil from their countries and disrupt the world's available supply of oil. And Chávez certainly might under different circumstances.

Which is what we think Hugo Chávez may hear whenever Simón Bolívar's remains whisper to him in their detailed dialogues....