How much will health insurance premiums turn out to be in 2010?

To answer those questions, we're returning to the the Kaiser Family Foundation's 2009 Annual Survey of Employer Health Benefits, which tracks the growth of employer-provided health insurance over time. 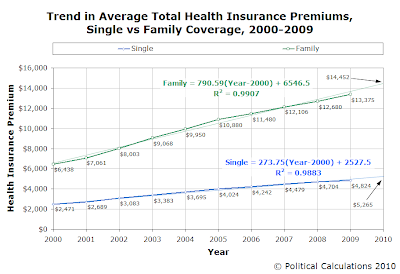 Today, we've extracted the average annual health insurance premimum data for single coverage and family coverage for all plans, which we've used to create a simple straight line projection of future costs over time. We've presented that information graphically, showing the survey's data from 2000 through 2009 while projecting where those costs will be in 2010 based on the trend that appears to have existed throughout those years.

But it's not quite as simple as that! In looking closer at the trend lines with respect to the actual data, we find that there's a bit of a sine wave type deviation from that otherwise straight line trend. A deviation that would seem to directly pace the relative strength of the U.S. economy, falling below the linear trend line in years of recession and rising above it in years of strong economic performance. 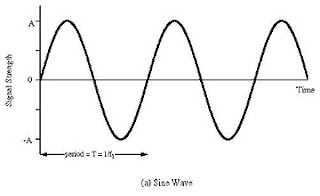 Which is exactly what we should expect! Assuming that the recession that began when the economy last peaked in December 2007 is still influencing the rate of growth of health insurance, we should expect that those premiums for 2010 will fall below the level our first-cut projections would indicate.

They also shouldn't deviate far from the overall trend. So what we'll do is to simply take the average annual dollar increase for each kind of plan (which is given as the slope in the equations presented in our chart above) and add those values to the respective premium values for 2009. 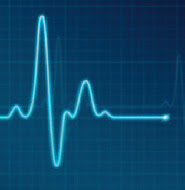 The other neat thing about this exercise is that it provides an objective means for evaluating how effective the recently passed law reforming health care insurance in the United States is in reducing the costs of these premiums. We will be able to do that by comparing the trajectory in health insurance costs established prior to the reform against what they will be as a result of the reform.

Unless, that is, there really aren't any savings from the reform to be had, in which case, we still have a pretty straightforward means of projecting future premium levels.