On 12 August 2010, CNBC reported on data provided by the International Labor Organization that global youth unemployment had hit a record high:

We wondered how many of that increase of 7.8 million unemployed teens and young adults might be Americans. So first, we found out how the population of individuals between the ages of 16 and 24 changed from 2007 through 2009. Using the not-seasonally adjusted labor force statistics from the U.S. Census' Current Population Survey, which provides the estimated popluation size for this age group, to see if any dramatic swings have occurred in that demographic bracket over these years. 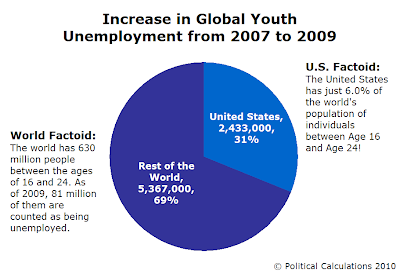 To determine the total change in the number of unemployed teens and young adults then, we added the 159,000 increase in this demographic group's population to the 2,274,000 decline in the number of individuals between the ages of 16 and 24 counted as being employed between 2007 and 2009. Doing so, we find the total number of unemployed individuals between the ages of 16 and 24 in the United States increased by 2,433,000 during just these two years.

Which means that 31% of the increase in global youth unemployment between 2007 and 2009 occurred just in the United States. By contrast, the United States has just 6.0% of the entire world's population of 630,000,000 teens and young adults.

Teen-focused retailers, which generally had a rough July, are suffering from a more challenging environment as teen unemployment is at record levels. That means young people have less money for new back-to-school clothes, leaving parents to pick up the slack.