We're borrowing the UK edition title of Simon Kuper and Stefan Szymanski's Soccernomics to take the opportunity to look at the math that helps explain, well, why England only goes so far in tournaments before losing in international competition.

The math that explains why England loses is graph theory, which in this case, has been developed by Javier López Peña and Hugo Touchette from the University of London, who compiled ball passing data and then used graph theory to describe team tactics during the 2010 FIFA World Cup:

For each national side, Drs López Peña and Touchette have drawn up a 'network' of passes between players throughout the tournament and analysed how these networks compare between teams. Dr Touchette explains: "Each player in the network is given a score called centrality which measures how vital they are to the network. The higher the centrality score, the bigger the impact if that player wasn't there. This method is most commonly used to make computer networks more robust, but it can also be used to plan football strategy."

Graph Theory is used to analyse different types of network, most commonly to investigate computer networks - such as the internet - and to model what would happen if different parts of the networks were suddenly removed. This type of research, which takes place in Queen Mary's School of Mathematical Sciences, can make computer networks more robust and less susceptible to disruption.

They applied the math to the 2010 FIFA World Cup England-Germany match, creating the following diagram representing each team's execution during the game: 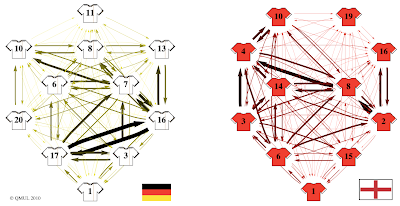 Here's how they interpret the network connections represented in each team's diagram:

The analysis shows the English squad to have a balanced line-up with no single player more important than the team as a whole. Dr López Peña said: "The good midfield work of Frank Lampard, Steven Gerrard and Gareth Barry doesn't appear to transfer very well to the forwards, with Wayne Rooney receiving on average three times more passes than Jermain Defoe. This makes the English attack very predictable and easily stoppable by blocking Rooney, who is usually forced to give the ball back to Gerrard."

The German network appears even more balanced than the English one, with a higher number of passes, suggesting more circulation of the ball. "Particularly relevant are the passes between Philipp Lahm and Bastian Schweinsteiger and most of the German attacks are built up from the defenders. Mesut Oezil makes good work connecting both sides of the field on the attack, making the German offensive game very effective and hard to defend against. The key player in the German strategy remains Schweinsteiger, who was effectively blocked by the Spanish midfielders' characteristic fast circulation in their semi-final defeat," said Dr López Peña.

Using this method, Peña and Touchette successfully anticipated that Spain would prevail over the Netherlands in the tournament's final match. Which puts the two mathematicians right up there with Paul the Octopus!