In the absence of new, noise-driven events, we can expect that the average of stock prices in the United States as measured by the S&P 500 will rise to a level between 1182 and 1218 in the very near future, with 1200 marking the midpoint of our forecast range. 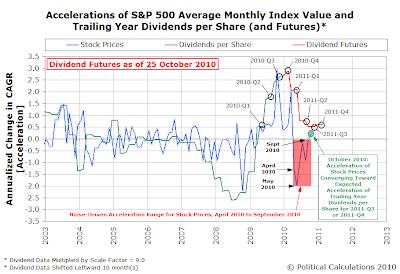 We base our forecast for stock prices in the short term upon our basic model that correlates the rate of change in the growth rate of dividends expected to be paid in the future with changes in the rate of growth of stock prices. At present, we observe that the large scale noise-driven event that ran from April 2010 into September 2010 appears to have concluded as investors are now focusing anywhere from 10-14 months forward in time, toward either the third or fourth quarter of 2011 in setting today's stock prices.

Our uncertainty regarding which distant future quarter investors have focused upon is due to their very similar projections for changes in the expected future growth rate of dividends - we could use either quarter's data in our math to produce very similar results. 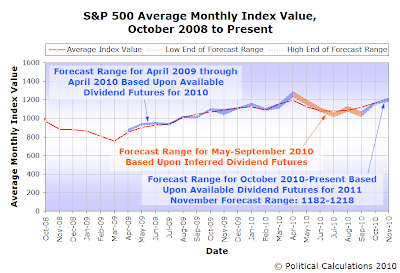 Looking over our prediction track record for stock prices, we find nine direct hits out of the nineteen month-ahead predictions we've offered since April 2009, with four near misses where stock prices came within 1% of falling within our forecast range. We note the near misses since our forecasting method remains a work in progress, where we have adapted our methods throughout the period in which we've offered our predictions publicly.

Those methods include the indirect method we developed (shown in the chart as the orange-shaded region) to account for the period from April 2010 through September 2010, when we lacked dividend futures data looking forward far enough ahead in time to anticipate where stock prices would go using our direct method (shown in the chart as the blue-shaded regions).

We also note that if we made coin toss-type predictions with stock prices, simply predicting whether the stock market would be up or down based upon where our next-month forecast range falls with respect to the month in which we made the prediction, we would have been correct in 17 out of 19 times over the last year and a half.