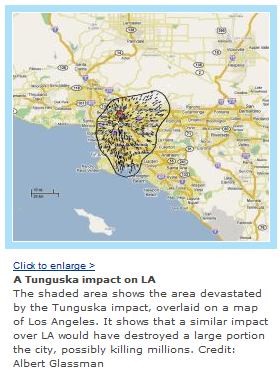 Welcome to the 117th edition of the Cavalcade of Risk, the only blog carnival dedicated to dealing with all the potential dangers in the world that might strike you down at any time!

Dangers like being killed by a meteorite, for instance! Just imagine, if you will, that something like what happened to the frozen Siberian plain of Tunguska were to happen to a place that really deserves it, like say, Los Angeles. What should we do about that?

If you're an unethical scientist seeking funding, you might be inclined to use the fear of that kind of danger to rake in huge government grants to study the problem. Then create more fear of the possibility to get even more funding.

Why, if the danger were great enough, entire industries would spring up for the sake of protecting you and the things you care about from that kind of disastrous outcome by selling you the things you might need to cope with the possibility that you or your family might have to deal with the damage it might do, which ranges from being possibly being physically struck dead or injured by a rock from the sky, assuming you lived, to the tsunamis that might flood your home if one splashed down in a body of water near your home, say close to Los Angeles!

But how much risk is there of that? We found out from a geologist who, after running some very real numbers considering the likelihood of such an event in geologic time, wrote with confidence:

Nobody reading this blog will be killed by a meteorite impact.

Which is why the fine people of Los Angeles are, for the moment, free from the fear of being struck by a meteor impact and are instead hard at work ripping off this idea for their screenplays for a number of movies coming out next summer. Otherwise, they'd all be out buying sump pumps to deal with the tsunami potential (more on sump pumps later....)

As it happens, there are more real risks and dangers for people to consider. Starting with the risk that the individuals who contributed posts to this edition of the Cavalcade of Risk faced when they submitted their posts for consideration for this week's edition.

You see, every so often, the Cavalcade of Risk's hosts have to deal with the problem of people contributing posts that are either totally unrelated spam or that don't have much to do with the concept of risk. Normally, they ignore those kinds of posts, but still have to go to the time and trouble of reading and reviewing them only to find out that they wasted their time because the contributor chose to ignore the guidelines for contributing posts to each edition of the Cavalcade of Risk.

But today, we're not going to ignore them. We're going to mock them until it hurts instead....

To do that, we will be using our well-established Cavalcade of Risk rating system. If there are those among you who dare anger the host, you'll find out that there is indeed a risk to contributing anything less than a well-written, on-topic post to the Cavalcade.

The table provides a quick guide for interpreting the ratings we'll presenting for each post contributed to this week's Cavalcade of Risk.

Here, a post with the rating Aa1 is one that is fully on topic, will make you smarter and is highly readable. By contrast, reading a post with the rating Dc3 would be like going through Homer Simpson's ordeal, only worse. And before you say anything, we do know that "c" should say "Makes you more stupid," but we figure that if you have read or have written enough of those kind of posts that your language processing skills are such that you wouldn't notice if we didn't point it out ourselves. After all, we discovered in this edition that at least one of you has difficulty counting all the way to ten....

Let's get on with the pain parade! The 117th edition of the Cavalcade of Risk is ready for your review - feel free to click the column headings to dynamically sort the entries according to the indicated category (If you're accessing the Cavalcade from an RSS news feed, you'll need to click through to our site to get that functionality....)

The next edition of the Cavalcade of Risk is scheduled for 17 November 2010 at Colorado Health Insurance Insider. The previous edition appeared at Workers Comp Insider.

On a final note for this edition of the Cavalcade of Risk, Hank Stern is, as always, anxious for volunteers to host - if you're interested in dealing out this kind of abuse or just highlighting the best posts on the topic of risk, contact him as soon as possible to reserve a slot!