Political Calculations
Unexpectedly Intriguing!
15 November 2010
The Skyrocketing Compensation of Federal Employees
USA Today reports on the growing disconnect between the compensation of federal government employees and everyone else:

Federal salaries have grown robustly in recent years, according to a USA TODAY analysis of Office of Personnel Management data. Key findings:

Since 2000, federal pay and benefits have increased 3% annually above inflation compared with 0.8% for private workers, according to the Bureau of Economic Analysis.

Just how far out of whack has the pay and benefits of the federal government's 2.15 million civilian employees become with respect to the 137 million other American workers? CBS News reported back in March 2010:

As it happens, CNN described the excessively generous benefits federal government employees receive back in 2006, in considering why these workers were so much more likely to keep working at their jobs compared with workers holding similar jobs in the private sector:

Despite lower pay in the upper echelons of the government, half of government workers surveyed by CareerBuilder.com said they plan to stay in their current jobs until retirement, and the government's benefits package may be one reason for federal employees' longevity.

Unlike most private employees, federal workers can choose from several health plans and life insurance options, according to the Department of Labor's "Career Guide to Industries." The government also helps pick up the tab on the premiums.

Government workers also get more paid time off than many other employees. All federal employees receive 13 days of sick leave a year, which accrue indefinitely, according to the DOL. They also earn 13 vacation days each of their first three years of service, 20 vacation days for their next 12 years, and 26 vacation days after their 15th year.

And the benefits don't stop at retirement. Those hired after January 1, 1984 can participate in the three-tiered Federal Retirement System.

We would argue that federal employees really need to have their pay and benefits brought into full alignment with those available in the private sector. Who are the ones, after all, who provide the source of funds that provide for the full compensation of federal employees. The disparity illustrated in our chart below is something that cannot continue: 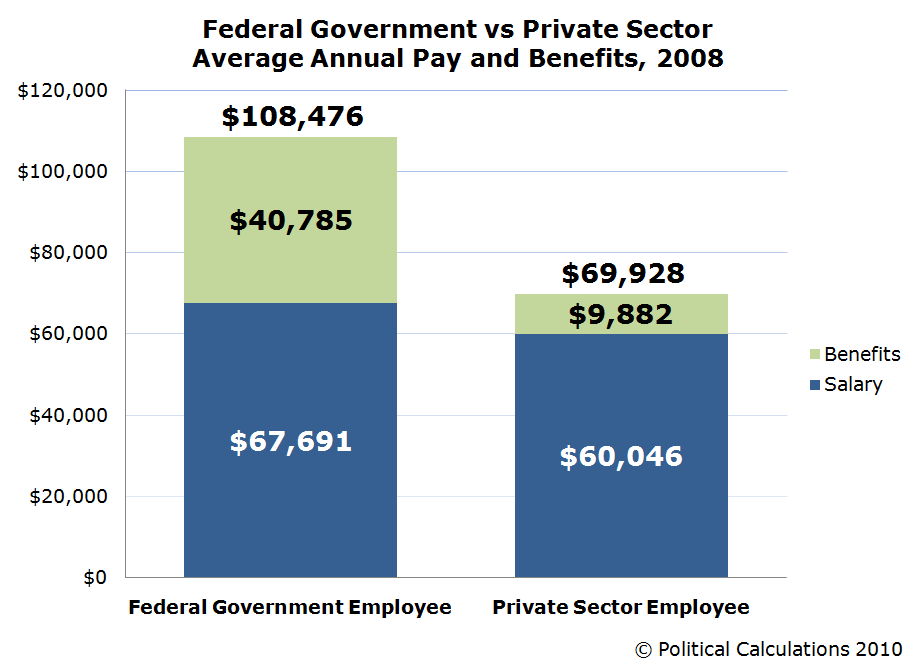 P.S. Don't think that aligning federal employees pay and benefits with those typical in the private sector is harsh. There are a large number of jobs in the federal government where bringing the compensation into alignment with the private sector would mean raises for the affected employees.

As for the others, well, how exactly would bringing their full compensation into alignment with the private sector that provides the money to support them not be fair? It's not like that kind of imbalance is sustainable....