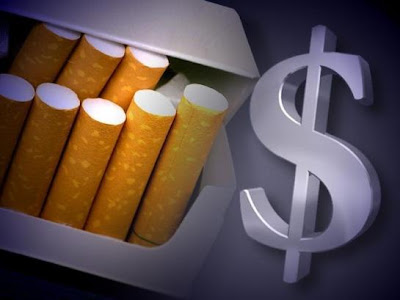 How much does bootlegging tobacco products pay in New York?

That's a good question because unlike Hawaii, New York's tobacco product consumers have lots of options for evading the state's highest-in-the-nation cigarette tax of $4.35 per pack, which went into effect during the summer of 2010, bringing the average cost of a pack of cigarettes in New York state to $9.20.

So to find out just how much money a tobacco consumer could save by avoiding New York's tobacco taxes just by traveling to its neighboring states, we've adapted the tool we developed for our original "Business of Bootlegging" post to apply to New York's situation.

In our tool, the default data applies to the situation where a hypothetical tobacco product consumer who lives in the state capital of Albany would travel 124 miles on U.S. interstate highways to Matamoras, Pennsylvania to exploit the savings of $2.75 per pack in cigarette taxes between the two states.

Here, we'll assume our casual cigarette bootlegger makes the round trip just once per week, bringing back 30 cartons per trip, which they then sell for $8.00 per pack. The same price the New York Post reports they paid to a vendor in New York City for a pack that didn't carry the state's cigarette tax stamp (HT: Newmark's Door).

Can our hypothetical bootlegger make a profit by making a run for the border? Just click the "Calculate" button to find out!

But what about a serious smuggler? One willing to risk the penalties associated with evading New York's tobacco taxes by making the trip at least once per business day? Which if this case from May 2010 is any indication, resulted in federal charges being filed against 41 individuals who face the risk of life in prison for money laundering and criminal conspiracy.

Modifying our tool to increase the number of trips per year to 260, we find that our professional smuggler would have an annual revenue of $624,000 against annual costs of $561,080, producing an income tax free net gain of $62,920 for what we might describe as a one-person operation.

Meanwhile, New York's tobacco product consumers are saving 13.0% over what they might legally have to pay by shifting their buying to support the bootlegging operations.

Is it any wonder then that New York tobacco product consumers are turning to the black market? So much so that the state now estimates that it has failed to collect as much as $20 million per month in cigarette taxes as what it had predicted before imposing its pre-highest-tax-in-the-nation level of tobacco product consumption since the new tax went into effect in July 2010:

The underground tobacco market is spreading like a fast-growing cancer in the wake of tax hikes that make New York cigarettes the most expensive in the nation -- and it's costing the state tens of millions a month in lost tax revenue, a Post analysis has found.

Illegal cigarettes are pouring into neighborhood bodegas by the truckload from neighboring Indian reservations, lower-tax states in the South and even as far away as China, authorities say.

Government data show that New York state is being smoked out of as much as $20 million a month from all these illegal cigarette purchases -- an estimated 7.3 million packs a month sold off the state tax radar.

If we up the "Retail Price per Pack (Where Sold)" in our tool by $1.50 (to account for New York City's own tobacco tax), bringing it up to $10.80 per pack, we find that the typical savings for a tobacco product buyer who chooses to participate in New York's underground cigarette economy rises to 25.9%.

With that kind of savings on the consumer end and that kind of money to be made on the bootlegger's side, we can say with confidence that New York's cigarette smuggling problem is only going to get bigger.