It's time for our annual Turkey Week here at Political Calculations, where we drop everything else and celebrate the most American of holidays: Thanksgiving! We'll start our celebration this year with a question:

What effect does a deep recession have upon the production of turkeys in the United States? 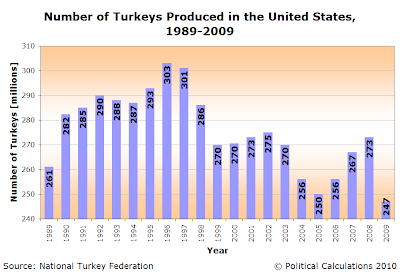 To put it mildly, it results in what we'll call the "Turkey Apocalypse". Our first chart of Turkey Week 2010 reveals a dramatic plunge in the number of turkeys produced in the United States in 2009, which coincides with the deepest portion of job loss resulting from the recession that began in December 2007.

In percentage terms, 2009 also marked the largest ever one-year percentage change in the annual production of turkeys in the United States, with 9.5% fewer turkeys produced in 2009 as compared to 2008.

This pattern sharply contradicts what we observed last year, when we speculated that the increases in turkey consumption that we see have taken place in other years of recession was driven by people turning to traditional or comfort foods at times of economic stress.

2009's data strongly indicates that bigger forces were at work. We'll be digging deeper in the days ahead....