In the now three years since the total level of employment peaked in the U.S., some 7,595,000 fewer people were employed in November 2010 than had jobs in November 2007, as the latest data suggests that the U.S. job market has seen no sustained improvement since March 2010. 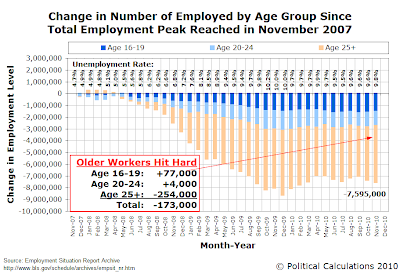 Breaking November 2010's data down by age group, we find that the number of working teens increased by 77,000 in November, followed by an increase of 4,000 young adults between the ages of 20 and 24.

But those gains were more than offset by the 254,000 individuals Age 25 or older who were no longer counted as being employed as compared in November 2010, as these older Americans absorbed the brunt of job loss during the month.