Occasionally, our posts are picked up by the editors at Seeking Alpha, who create their own post title and occasionally attempt to edit the more challenging portions of the HTML code that lies underneath what we write, sometimes with good effect and other times with not so fortunate results (sorry guys!)

But unlike the posts here at Political Calculations, which doesn't allow comments at all*, the posts at Seeking Alpha allow for comments to be made. Which brings us to the two "individuals" who we'll describe as being perhaps the two stupidest commenters on Seeking Alpha. Yes, we're going to get all Barry Ritholtz on your sorry posteriors!....

Let's set the stage for stupidity, shall we. Back on 25 October 2010, Seeking Alpha picked up our post "The S&P 500 Next: 1200", which they retitled "S&P 500's Next Stop: 1200". In that post, we forecast where the average daily closing price of stock prices as measured by the S&P 500 would fall beginning in the last week of October and going into, and even through, the month of November, as we broke from our usual practice of putting a back end on when the prediction would hold. And we did all that in the post title and the very first paragraph of the post:

In the absence of new, noise-driven events, we can expect that the average of stock prices in the United States as measured by the S&P 500 will rise to a level between 1182 and 1218 in the very near future, with 1200 marking the midpoint of our forecast range.

The remainder of the post went on to discuss the things that would cause stock prices to potentially deviate from our forecast level. But apparently, all that was lost upon Seeking Alpha commenter Trader14, an "active day trader" <SNORK!>, who opined:

Did they really just use their model to predict the S&P would move to where it is right now?

"Right now" perhaps referring to the closing price of 1183.08 for the S&P 500 on 22 October 2010, only the second day the S&P 500 saw above 1182 since 3 May 2010. That brilliant observation was quickly followed up by MikeyLV, an individual with "no professional investment skills", offering just the kind of insight you'd expect someone with that kind of background to have:

Yes. Yes they did.

No chumps. No we didn't. We told you exactly where we expect the average of the S&P 500 would be going forward, which we expect should hold until we say otherwise since we didn't specify when our forecast range would no longer apply.

Let's stop the clock on that prediction here, shall we? Here's the running average of the S&P 500's daily closing prices for each day starting with 25 October 2010 through 30 November 2010: 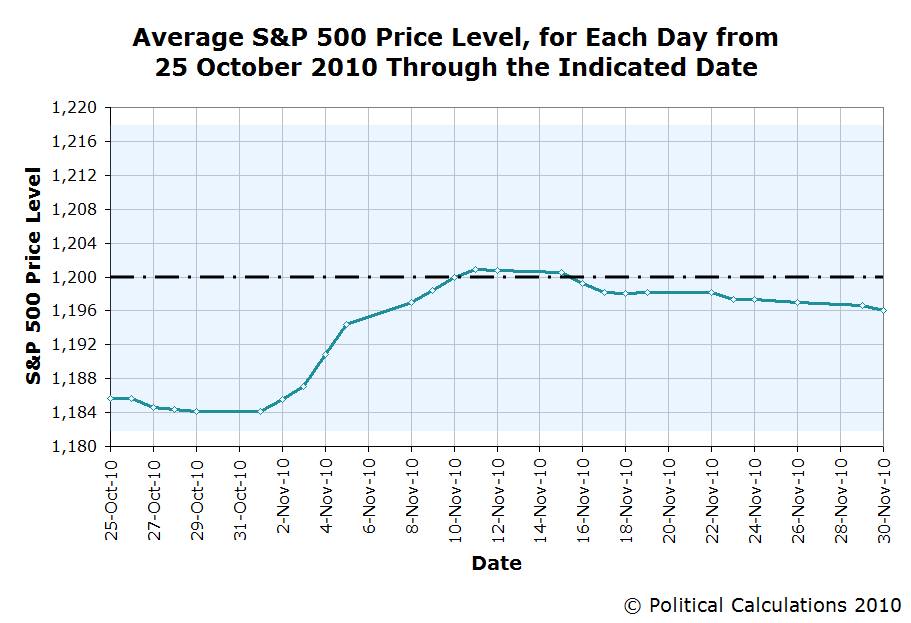 And here we are now, some 26 trading days later (that's 37 calendar days, MikeyLV) and only with the exception of just five of those days did the S&P 500's daily closing stock prices even fall outside our forecast range during all that time, while the average (ATTN Trader14: that would be the thing we actually track) was well within our predicted limits.

As for where stock prices will go next, well, you'll just have to wait and see. We're taking this December off from making public predictions for stock prices. But clearly, Trader14 and MikeyLV are up to the job of filling in for us, being the masters of observation and insight that they are!

* Or rather, Political Calculations hasn't allowed comments since January 2006. We used to, but discontinued them due to a combination of the low number of comments our posts received and an increase in computer-generated blog comment spam - or in other words, because the signal-to-noise ratio for comments to our blog was extremely low.