Between roads and light rail, which option would you suppose is the most cost effective for moving people into and through the downtown area of a major American city?

Now, let's add some more details. Let's say that major American city is Seattle, Washington where a major roadway, the seismically-challenged Alaskan Way Viaduct is reaching the end of its useful life.

To replace the existing elevated double-deck roadway, the Washington state government authorized a deep-bore underground tunnel project, which is set to begin construction this year. Seattle's mayor, Mike McGinn, is opposed to the project because of its high costs. So much so that he commissioned a chart comparing the cost of the project to the cost of existing throughways in Seattle, which is described by The Stranger's Eli Sanders: 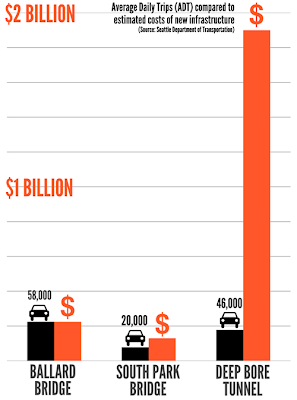 The red [sic - it's really orange!] line that shows the cost of the tunnel runs almost off the chart, but the black line showing its predicted usage sat well under the present usage for the little old Ballard Bridge, and just above the predicted usage for the fixed-up South Park bridge. Said McGinn, pointing to his chart:

What their own preliminary [tunnel] studies show is that when you do [the planned tolling], you have 41,000 cars a day using the tunnel. I just want to put that in perspective, and I brought a little graph here... So the deep bore tunnel, it'll move a few more cars than the South Park Bridge, and a lot less than the Ballard Bridge, and cost... a couple billion.

Sounds outrageous, right? Now, what if we compare the cost of the proposed deep bore underground tunnel project to the cost of building a light rail system to operate over much of the same area? Specifically, the area Sound Transit's Central Link, which is similar in scale and scope to the proposed deep-bore tunnel and which Seattle has already built!

Something which the Washington Policy Center's Michael Ennis has already done, going to the trouble of modifying Mayor McGinn's chart to include it (HT: Sound Politics):

Seattle Mayor Mike McGinn loves to use this chart to show the apparent inefficiency of the Viaduct tunnel. If you follow transportation policy or the Viaduct issue, you have seen it many times. It compares cost to how many cars would use it with two other road projects in Seattle.

He then argues we should not replace the Viaduct with a tunnel because it costs too much and provides too little benefit.

McGinn's efficiency argument against the tunnel is hypocritical when the mayor also supports light rail, which is even more expensive and carries fewer people.

Washington Policy Center took McGinn's chart and added some context by including a comparison to Central Link light rail costs and ridership, which McGinn supports. 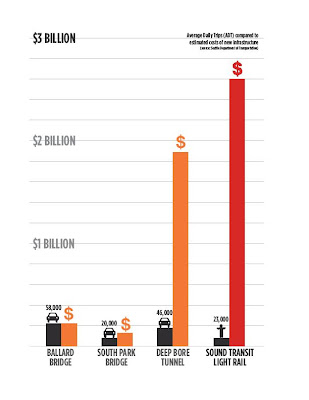 Sound Transit's Central Link light rail line cost $2.6 billion to build and, assuming that the 3,195,908 people who boarded the line during the first six months of 2010 are any indication, averages an equivalent 23,000 round trip commuters per day.

Meanwhile, Mayor McGinn's idea of a "wasteful" project, representing what perhaps is the most expensive way to build a road, would cost roughly 23% less (assuming it costs a full $2 billion) and would be capable of moving double the number of people that light rail currently does both into and through downtown Seattle.

We'll close with the Washington state's drive-through video simulation of the proposed tunnel:

Is it us or is that the nicest weather for a drive that Seattle's ever seen?