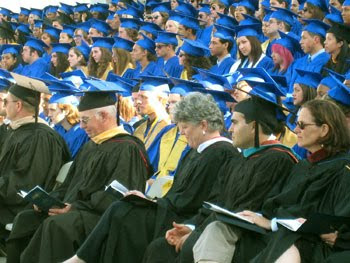 According to standards adopted by the California State Board of Education in December 1997 and reposted again in June 2009, secondary school students in the state's public education institutions are expected to take and pass Algebra sometime between the 8th and 12th grades. In achieving that standard, graduates from the state's high schools should be very well prepared to enter college ready to do well because of the role of Algebra as a "gateway" class - one that establishes a solid foundation of basic learning that is a prerequisite for supporting the kind of higher level learning that is highly valued by employers.

So how well are California's public high schools doing at achieving that standard, which the state adopted over twelve years ago and reaffirmed less than two years ago?

Dayna Straehley of the Press Enterprise, a newspaper serving the southern Californian counties of Riverside and San Bernandino (aka "the Inland Empire"), reports:

High schools think they're preparing students for college, but when many graduates get there, they have to take remedial classes, Inland educators say.

It's not just precalculus or even algebra that students haven't mastered. Some high school graduates need remedial arithmetic, according to the community colleges.

As with any government-operated system, the bureaucrats who run it are quick to find excuses:

Students need remedial math for various reasons, Riverside City College math instructor Pamela Whelchel said. Some learned algebra and geometry or even calculus in high school, but didn't study or review for the placement test. Some students forgot the math they once knew.

RCC student Fadi Dib, 19, said he took Algebra 2 in high school but needed a refresher in the subject. He was working elementary algebra problems in Whelchel's math lab recently.

"Math, if you don't keep practicing on it, you'll forget it," Dib said.

Whelchel said the class is comparable to high school Algebra 1, which California expects students to master by the ninth grade.

Chris Contreras, 21, one of her students, remembered the Algebra 1 he took in high school as way easier than the work he was doing recently in RCC's math lab.

Student Chris Contreras may have a point, in that compared to high school classes, which are taught over an entire school year, an Algebra 1 class at the college level would be completed in 16 weeks or less. However, since he would have had previous exposure to the material in high school, that faster pace should not have presented a significant burden. Unless he hadn't been adequately exposed to the kind of math that would be included as part of a college-level Algebra 1 class in the first place.

Which brings up another good question: Is the kind of Algebra being taught in high school different from what's taught in college? As Straehley finds, perhaps it is:

States tell high schools what to teach, so students can pass standardized tests required by No Child Left Behind, which set federal requirements for school testing. But those requirements have been academic minimums, not what students need to succeed in college.

The "No Child Left Behind Act of 2001" was former President George W. Bush's "signature" achievement in education. Unfortunately for Californians, that federal law had no impact upon the setting of the standards for math to which public secondary schools in the state of California are required to comply. As we've already revealed, those standards were set in 1997, nearly four years before "No Child Left Behind" even became federal law. We also see that they were not altered as a result of the federal law, which we confirm in the standards being reposted, without change, in 2009.

Could it then be a problem of miscommunication between state-run bureaucracies? Perhaps the state's public secondary education schools are unaware of what they really need to be teaching the students attending their institutions so they don't require remedial education if and when they reach a college campus.

The University of California puts out documents of what it expects of college freshmen, but she said high schools have paid little attention. Schools have been forced to focus on state requirements and No Child Left Behind.

So we find that the real standard for math that California's public high school students need to achieve by the time they reach college isn't some mysterious secret known only to an elite sect who dresses in funny hats and robes. Somehow though, despite knowing what the real standards should be, the state's public secondary schools are so busy doing other things that they can't be bothered to adapt to their customers (aka "students") real needs. Somehow, they would appear to be claiming, doing that would render it impossible for them to satisfy the state Board of Education's low requirements for math education as well as the No Child Left Behind federal law which, we've already seen, never affected the state's standards for math education in the first place.

We're not exactly sure how acting to ensure that their students can perform the kind of math at the higher standard actually required at the college level would make it impossible for the school to comply with a lower standard for math education, but perhaps that's something California's educators learn in the graduate education schools they attend as they seek to become fully credentialed.

Now, how does their ability to apply quantitative reasoning skills, like the ones that are supposed to be taught in high school Algebra classes, compare to nearly every other post-graduate major in non-education-related fields again?...