For the first time since April 2010, the employment situation in the United States showed an actual improvement in February 2011, as the number of employed Americans rose to its highest level since that time. 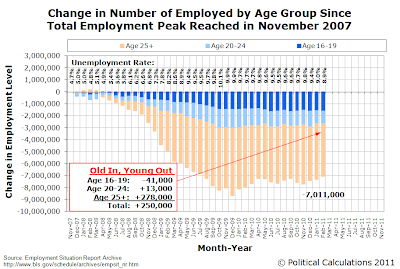 However, the improvement in jobs was not up across the board, as these increases were offset by a reduction of 41,000 individuals between the ages of 16 and 19 in the U.S. workforce.

Since the total employment level peaked in November 2007 a month ahead of the official beginning of the recession, the percentage representation of teens in the U.S. workforce has fallen by nearly a whole percentage point, from 4.03% to 3.08% as of February 2011. During that time, some 1,611,000 jobs for teens have been been lost from the U.S. job market, which accounts for 23.0% of the total of 7,011,000 jobs that have disappeared since.

Combined, teens and young adults from 16 through 24 years of age represent 37.9% of all jobs lost in the United States since November 2007, even though these individuals have not accounted for more than 13.31% of the U.S. non-institutional civilian labor force since the level of total employment peaked before the recession began.

What that suggests is that taking steps to correct the employment situation for teens and young adults would provide the biggest bang for the buck in bringing the U.S. unemployment rate back down to pre-recession levels.